Kalevala, The Land of the Heroes, Volume One 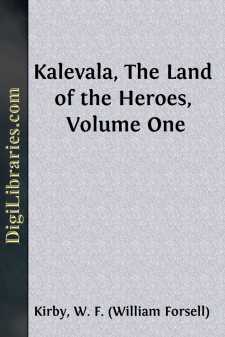 The Kalevala, or the Land of Heroes, as the word may be freely rendered, is the national epic of Finland, and as that country and its literature are still comparatively little known to English readers, some preliminary explanations are here necessary.

On reference to a map of Europe, it will be seen that the north-western portion of the Russian Empire forms almost a peninsula, surrounded, except on the Norwegian and Swedish frontiers, by two great arms of the Baltic Sea, the Gulf of Bothnia and the Gulf of Finland; the two great lakes, Ladoga and Onega; the White Sea, and the Arctic Ocean. In the north of this peninsula is Lapland, and in the south, Finland.

The modern history of Finland begins with the year 1157, when the country was conquered from the original inhabitants by the Swedes, and Christianity was introduced. Later on, the Finns became Lutherans, and are a pious, industrious, and law-abiding people, the upper classes being highly educated.

During the wars between Sweden and Russia, under Peter the Great and his successors, much Finnish territory was wrested from Sweden, and St. Petersburg itself stands on what was formerly Finnish territory. When what was left of Finland was finally absorbed by Russia in 1809, special privileges were granted by Alexander I. to the Finns, which his successors confirmed, and which are highly valued by the people.

The upper classes speak Swedish and Finnish; and the lower classes chiefly Finnish. Finnish is upheld by many Finns from patriotic motives, and there is a considerable modern literature in both languages. Translations of most standard works by English and other authors are published in Finnish.

The Finns call their country Suomi or Marshland; and it is often spoken of as the Land of Ten Thousand Lakes. The language they speak belongs to a group called Finnish-Ugrian, or Altaic, and is allied to Lappish and Esthonian, and more distantly to Turkish and Hungarian, There are only twenty-one letters in the alphabet; the letter J is pronounced like Y (as a consonant), and Y almost as a short I. The first syllable of every word is accented. This renders it difficult to accommodate such words as KГ„ВЃlГ„вЂўvГ„Ж’iГ„ВЃ to the metre; but I have tried to do my best.

The Finlanders are very fond of old ballads, of which a great number have been collected, especially by Elias Lönnrot, to whom it occurred to arrange a selection into a connected poem, to which he gave the name of Kalevala. This he first published in 1835, in two small volumes containing twenty-five Runos or Cantos, but afterwards rearranged and expanded it to fifty Runos; in which form it was published in 1849; and this was speedily translated into other languages. Perhaps the best translations are Schiefner's German version (1852) and Collan's Swedish version (1864). Several volumes of selections and abridgments have also appeared in America and England; and an English translation by John Martin Crawford (in two volumes) was published in New York and London in 1889....