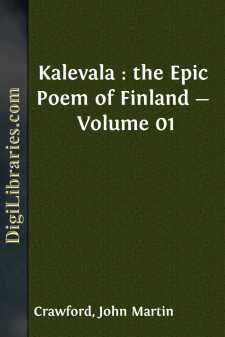 The following translation was undertaken from a desire to lay before the English-speaking people the full treasury of epical beauty, folklore, and mythology comprised in The Kalevala, the national epic of the Finns. A brief description of this peculiar people, and of their ethical, linguistic, social, and religious life, seems to be called for here in order that the following poem may be the better understood.

Finland (Finnish, Suomi or Suomenmaa, the swampy region, of which Finland, or Fen-land is said to be a Swedish translation,) is at present a Grand-Duchy in the north-western part of the Russian empire, bordering on Olenetz, Archangel, Sweden, Norway, and the Baltic Sea, its area being more than 144,000 square miles, and inhabited by some 2,000,000 of people, the last remnants of a race driven back from the East, at a very early day, by advancing tribes. The Finlanders live in a land of marshes and mountains, lakes and rivers, seas, gulfs, islands, and inlets, and they call themselves Suomilainen, Fen-dwellers. The climate is more severe than that of Sweden. The mean yearly temperature in the north is about 27°F., and about 38°F., at Helsingfors, the capital of Finland. In the southern districts the winter is seven months long, and in the northern provinces the sun disappears entirely during the months of December and January.

The inhabitants are strong and hardy, with bright, intelligent faces, high cheek-bones, yellow hair in early life, and with brown hair in mature age. With regard to their social habits, morals, and manners, all travellers are unanimous in speaking well of them. Their temper is universally mild; they are slow to anger, and when angry they keep silence. They are happy-hearted, affectionate to one another, and honorable and honest in their dealings with strangers. They are a cleanly people, being much given to the use of vapor-baths. This trait is a conspicuous note of their character from their earliest history to the present day. Often in the runes of The Kalevala reference is made to the "cleansing and healing virtues of the vapors of the heated bathroom."

The skull of the Finn belongs to the brachycephalic (short-headed) class of Retzius. Indeed the Finn-organization has generally been regarded as Mongol, though Mongol of a modified type. His color is swarthy, and his eyes are gray. He is not inhospitable, but not over-easy of access; nor is he a friend of new fashions. Steady, careful, laborious, he is valuable in the mine, valuable in the field, valuable oil shipboard, and, withal, a brave soldier on land.

The Finns are a very ancient people. It is claimed, too, that they began earlier than any other European nation to collect and preserve their ancient folk-lore. Tacitus, writing in the very beginning of the second century of the Christian era, mentions the Fenni, as he calls them, in the 46th chapter of his De Moribus Germanoram. He says of them: "The Finns are extremely wild, and live in abject poverty. They have no arms, no horses, no dwellings; they live on herbs, they clothe themselves in skins, and they sleep on the ground. Their only resources are their arrows, which for the lack of iron are tipped with bone." Strabo and the great geographer, Ptolemy, also mention this curious people. There is evidence that at one time they were spread over large portions of Europe and western Asia.

Perhaps it should be stated here that the copper, so often mentioned inThe Kalevala, when taken literally, was probably bronze, or "hardenedcopper," the amount and quality of the alloy used being not now known....