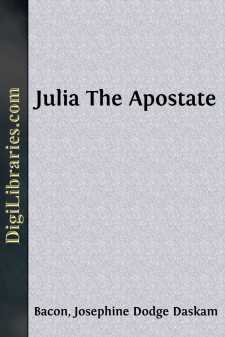 "You don't think it's too young for me, girls?"

"Young for you—par exemple! I should say not," her niece replied, perking the quivering aigrette still more obliquely upon her aunt's head. Carolyn used par exemple as a good cook uses onion—a hint of it in everything. There were those who said that she interpolated it in the Litany; but Carolyn, who was born Caroline and a Baptist, was too much impressed by the liturgy of what she called The Church to insert even an uncanonized comma.

"Now don't touch it, Aunt Julia, for it's deliciously chic, and if you had your way you'd flatten it down right straight in the middle—you know you would."

"I've always thought, Carrie—lyn," she added hastily, as her niece scowled, "that they put things askew to make 'em different—for a change, as you might say. Now, if they're never in the middle, it's about as tiresome, isn't it?"

Elise, whose napkin-ring bore malignant witness to her loving aunt, Eliza Judd, laughed irrepressibly: she had more sense of humor than her sister. It was she who, though she had assisted in polishing the old copper kettle subsequently utilized as a holder for the tongs and shovel, had refused to consider the yet older wash-boiler in the light of a possible coal-scuttle, greatly to the relief of her aunt, who blushed persistently at any mention of the hearth.

She patted the older woman encouragingly.

"That's right, Aunt Ju-ju, argue it out!" she advised.

Miss Trueman winced. She had never accustomed herself to those senseless monosyllables that parodied her name; nor could she understand the frame of mind that found them preferable to the comfortable "Aunt Jule" of the old days.

"Ju-ju!" Strips of unwholesome flesh-colored paste, sugar-sprinkled, dear to her childish heart but loathed by a maturer palate, rose to her mind. There had been another haunting recollection: for months she had been unable to define it perfectly, though it had always brought a thrill of disgust with its vague appeal. One day she caught it and told them.

"It was that dreadful creature Mr. Barnum exhibited," she declared, "that we didn't allow the children to go to see—Jo-jo, the Dog-faced Boy! You remember?"

Their cold horror, briefly expressed, had shown her that she had trespassed too far on their indulgence, and she spoke of it no more, but the memory rankled.

"It's so strange you don't see how cunning it is," Carolyn complained; "everybody does it now. The whole Chatworth family have those names, Aunt Ju, and it is the dearest thing to hear the old doctor call Captain Arthur 'Ga-ga.' You know that dignified sister with the lovely silvery hair? Well, they all call her 'Looty.' And nobody thinks of Hunter Chatworth's real name—he's always 'Toto.'"

"And he has three children!"

"Do the children call him Toto, too?" she demanded, with an attempt at sarcasm, a conversational form to which she was by nature a stranger....