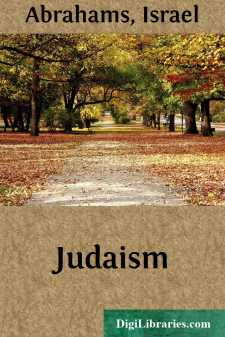 CHAPTER I THE LEGACY FROM THE PAST

The aim of this little book is to present in brief outline some of the leading conceptions of the religion familiar since the Christian Era under the name Judaism.

The word 'Judaism' occurs for the first time at about 100 B.C., in the Graeco-Jewish literature. In the second book of the Maccabees (ii. 21, viii. 1), 'Judaism' signifies the religion of the Jews as contrasted with Hellenism, the religion of the Greeks. In the New Testament (Gal. i. 13) the same word seems to denote the Pharisaic system as an antithesis to the Gentile Christianity. In Hebrew the corresponding noun never occurs in the Bible, and it is rare even in the Rabbinic books. When it does meet us, Jahaduth implies the monotheism of the Jews as opposed to the polytheism of the heathen.

Thus the term 'Judaism' did not pass through quite the same transitions as did the name 'Jew.' Judaism appears from the first as a religion transcending tribal bounds. The 'Jew,' on the other hand, was originally a Judaean, a member of the Southern Confederacy called in the Bible Judah, and by the Greeks and Romans Judaea. Soon, however, 'Jew' came to include what had earlier been the Northern Confederacy of Israel as well, so that in the post-exilic period Jehudi or 'Jew' means an adherent of Judaism without regard to local nationality.

Judaism, then, is here taken to represent that later development of the Religion of Israel which began with the reorganisation after the Babylonian Exile (444 B.C.), and was crystallised by the Roman Exile (during the first centuries of the Christian Era). The exact period which will be here seized as a starting-point is the moment when the people of Israel were losing, never so far to regain, their territorial association with Palestine, and were becoming (what they have ever since been) a community as distinct from a nation. They remained, it is true, a distinct race, and this is still in a sense true. Yet at various periods a number of proselytes have been admitted, and in other ways the purity of the race has been affected. At all events territorial nationality ceased from a date which may be roughly fixed at 135 A.D., when the last desperate revolt under Bar-Cochba failed, and Hadrian drew his Roman plough over the city of Jerusalem and the Temple area. A new city with a new name arose on the ruins. The ruins afterwards reasserted themselves, and Aelia Capitolina as a designation of Jerusalem is familiar only to archaeologists.

But though the name of Hadrian's new city has faded, the effect of its foundation remained. Aelia Capitolina, with its market-places and theatre, replaced the olden narrow-streeted town; a House of Venus reared its stately form in the north, and a Sanctuary to Jupiter covered, in the east, the site of the former Temple. Heathen colonists were introduced, and the Jew, who was to become in future centuries an alien everywhere, was made by Hadrian an alien in his fatherland. For the Roman Emperor denied to Jews the right of entry into Jerusalem....