Journal of a Voyage to Lisbon - Volume 1 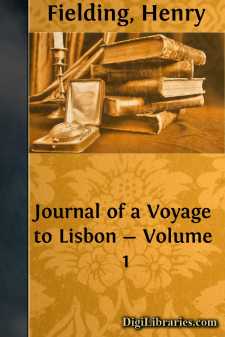 WEDNESDAY, June 26, 1754.—On this day the most melancholy sun I had ever beheld arose, and found me awake at my house at Fordhook. By the light of this sun I was, in my own opinion, last to behold and take leave of some of those creatures on whom I doted with a mother-like fondness, guided by nature and passion, and uncured and unhardened by all the doctrine of that philosophical school where I had learned to bear pains and to despise death. In this situation, as I could not conquer Nature, I submitted entirely to her, and she made as great a fool of me as she had ever done of any woman whatsoever; under pretense of giving me leave to enjoy, she drew me in to suffer, the company of my little ones during eight hours; and I doubt not whether, in that time, I did not undergo more than in all my distemper.

At twelve precisely my coach was at the door, which was no sooner told me than I kissed my children round, and went into it with some little resolution. My wife, who behaved more like a heroine and philosopher, though at the same time the tenderest mother in the world, and my eldest daughter, followed me; some friends went with us, and others here took their leave; and I heard my behavior applauded, with many murmurs and praises to which I well knew I had no title; as all other such philosophers may, if they have any modesty, confess on the like occasions.

In two hours we arrived in Rotherhithe, and immediately went on board, and were to have sailed the next morning; but, as this was the king's proclamation-day, and consequently a holiday at the custom-house, the captain could not clear his vessel till the Thursday; for these holidays are as strictly observed as those in the popish calendar, and are almost as numerous. I might add that both are opposite to the genius of trade, and consequently contra bonum publicum.

To go on board the ship it was necessary first to go into a boat; a matter of no small difficulty, as I had no use of my limbs, and was to be carried by men who, though sufficiently strong for their burden, were, like Archimedes, puzzled to find a steady footing. Of this, as few of my readers have not gone into wherries on the Thames, they will easily be able to form to themselves an idea. However, by the assistance of my friend, Mr. Welch, whom I never think or speak of but with love and esteem, I conquered this difficulty, as I did afterwards that of ascending the ship, into which I was hoisted with more ease by a chair lifted with pulleys. I was soon seated in a great chair in the cabin, to refresh myself after a fatigue which had been more intolerable, in a quarter of a mile's passage from my coach to the ship, than I had before undergone in a land-journey of twelve miles, which I had traveled with the utmost expedition.

This latter fatigue was, perhaps, somewhat heightened by an indignation which I could not prevent arising in my mind. I think, upon my entrance into the boat, I presented a spectacle of the highest horror. The total loss of limbs was apparent to all who saw me, and my face contained marks of a most diseased state, if not of death itself....