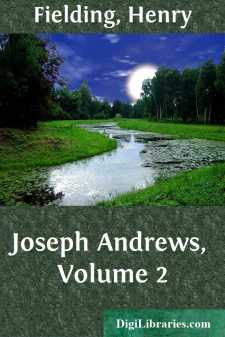 An interview between parson Adams and parson Trulliber.

Parson Adams came to the house of parson Trulliber, whom he found stript into his waistcoat, with an apron on, and a pail in his hand, just come from serving his hogs; for Mr Trulliber was a parson on Sundays, but all the other six might more properly be called a farmer. He occupied a small piece of land of his own, besides which he rented a considerable deal more. His wife milked his cows, managed his dairy, and followed the markets with butter and eggs. The hogs fell chiefly to his care, which he carefully waited on at home, and attended to fairs; on which occasion he was liable to many jokes, his own size being, with much ale, rendered little inferior to that of the beasts he sold. He was indeed one of the largest men you should see, and could have acted the part of Sir John Falstaff without stuffing. Add to this that the rotundity of his belly was considerably increased by the shortness of his stature, his shadow ascending very near as far in height, when he lay on his back, as when he stood on his legs. His voice was loud and hoarse, and his accents extremely broad. To complete the whole, he had a stateliness in his gait, when he walked, not unlike that of a goose, only he stalked slower.

Mr Trulliber, being informed that somebody wanted to speak with him, immediately slipt off his apron and clothed himself in an old night-gown, being the dress in which he always saw his company at home. His wife, who informed him of Mr Adams's arrival, had made a small mistake; for she had told her husband, "She believed there was a man come for some of his hogs." This supposition made Mr Trulliber hasten with the utmost expedition to attend his guest. He no sooner saw Adams than, not in the least doubting the cause of his errand to be what his wife had imagined, he told him, "He was come in very good time; that he expected a dealer that very afternoon;" and added, "they were all pure and fat, and upwards of twenty score a-piece." Adams answered, "He believed he did not know him." "Yes, yes," cried Trulliber, "I have seen you often at fair; why, we have dealt before now, mun, I warrant you. Yes, yes," cries he, "I remember thy face very well, but won't mention a word more till you have seen them, though I have never sold thee a flitch of such bacon as is now in the stye." Upon which he laid violent hands on Adams, and dragged him into the hog-stye, which was indeed but two steps from his parlour window. They were no sooner arrived there than he cry'd out, "Do but handle them! step in, friend! art welcome to handle them, whether dost buy or no." At which words, opening the gate, he pushed Adams into the pig-stye, insisting on it that he should handle them before he would talk one word with him.

Adams, whose natural complacence was beyond any artificial, was obliged to comply before he was suffered to explain himself; and, laying hold on one of their tails, the unruly beast gave such a sudden spring, that he threw poor Adams all along in the mire....