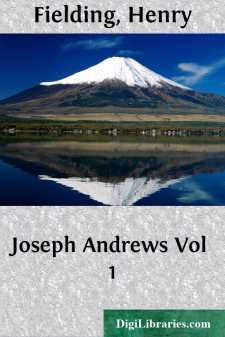 There are few amusements more dangerous for an author than the indulgence in ironic descriptions of his own work. If the irony is depreciatory, posterity is but too likely to say, "Many a true word is spoken in jest;" if it is encomiastic, the same ruthless and ungrateful critic is but too likely to take it as an involuntary confession of folly and vanity. But when Fielding, in one of his serio-comic introductions to Tom Jones, described it as "this prodigious work," he all unintentionally (for he was the least pretentious of men) anticipated the verdict which posterity almost at once, and with ever-increasing suffrage of the best judges as time went on, was about to pass not merely upon this particular book, but upon his whole genius and his whole production as a novelist. His work in other kinds is of a very different order of excellence. It is sufficiently interesting at times in itself; and always more than sufficiently interesting as his; for which reasons, as well as for the further one that it is comparatively little known, a considerable selection from it is offered to the reader in the last two volumes of this edition. Until the present occasion (which made it necessary that I should acquaint myself with it) I own that my own knowledge of these miscellaneous writings was by no means thorough. It is now pretty complete; but the idea which I previously had of them at first and second hand, though a little improved, has not very materially altered. Though in all this hack-work Fielding displayed, partially and at intervals, the same qualities which he displayed eminently and constantly in the four great books here given, he was not, as the French idiom expresses it, dans son assiette, in his own natural and impregnable disposition and situation of character and ability, when he was occupied on it. The novel was for him that assiette; and all his novels are here.

Although Henry Fielding lived in quite modern times, although by family and connections he was of a higher rank than most men of letters, and although his genius was at once recognised by his contemporaries so soon as it displayed itself in its proper sphere, his biography until very recently was by no means full; and the most recent researches, including those of Mr Austin Dobson—a critic unsurpassed for combination of literary faculty and knowledge of the eighteenth century—have not altogether sufficed to fill up the gaps. His family, said to have descended from a member of the great house of Hapsburg who came to England in the reign of Henry II., distinguished itself in the Wars of the Roses, and in the seventeenth century was advanced to the peerages of Denbigh in England and (later) of Desmond in Ireland. The novelist was the grandson of John Fielding, Canon of Salisbury, the fifth son of the first Earl of Desmond of this creation. The canon's third son, Edmond, entered the army, served under Marlborough, and married Sarah Gold or Gould, daughter of a judge of the King's Bench....