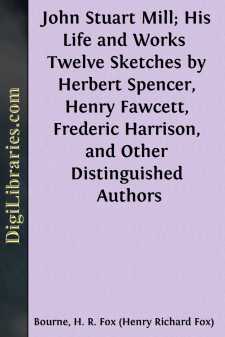 A SKETCH OF HIS LIFE

John Stuart Mill was born on the 20th of May, 1806. "I am glad," wrote George Grote to him in 1865, with reference to a forthcoming article on his "Examination of Sir William Hamilton's Philosophy," "to get an opportunity of saying what I think about your 'System of Logic' and 'Essay on Liberty,' but I am still more glad to get (or perhaps to make) an opportunity of saying something about your father. It has always rankled in my thoughts that so grand and powerful a mind as his left behind it such insufficient traces in the estimation of successors." That regret was natural. The grand and powerful mind of James Mill left very notable traces, however, in the philosophical literature of his country, and in the training of the son who was to carry on his work, and to be the most influential teacher in a new school of thought and action, by which society is likely to be revolutionized far more than it has been by any other agency since the period of Erasmus and Martin Luther. James Mill was something more than the disciple of Bentham and Ricardo. He was a profound and original philosopher, whose depth and breadth of study were all the more remarkable because his thoughts were developed and his knowledge was acquired mainly by his own exertions. He had been helped out of the humble life into which he had been born by Sir John Stuart, who assisted him to attend the lectures of Dugald Stewart and others at Edinburgh with a view to his becoming a minister in the Church of Scotland. Soon finding that calling distasteful to him, he had, in or near the year 1800, settled in London as a journalist, resolved by ephemeral work to earn enough money to maintain him and his family in humble ways while he spent his best energies in the more serious pursuits to which he was devoted. His talents soon made him friends, and the greatest of these was Jeremy Bentham.

As erroneous opinions have been current as to the relations between Bentham and James Mill and have lately been repeated in more than one newspaper, it may be well here to call attention to the contradiction of them that was published by the son of the latter in "The Edinburgh Review" for 1844. "Mr. Mill and his family," we there read, "lived with Mr. Bentham for half of four years at Ford Abbey,"—that is, between 1814 and 1817,—"and they passed small portions of previous summers with him at Barrow Green. His last visit to Barrow Green was of not more than a month's duration, and the previous ones all together did not extend to more than six months, or seven at most. The pecuniary benefit which Mr. Mill derived from his intimacy with Bentham consisted in this,—that he and his family lived with him as his guests, while he was in the country, periods amounting in all to about two years and a half. I have no reason to think that his hospitality was either given or accepted as pecuniary assistance, and I will add that the obligation was not exclusively on one side. Bentham was not then, as he was afterwards, surrounded by persons who courted his society, and were ever ready to volunteer their services, and, to a man of his secluded habits, it was no little advantage to have near him such a man as Mr....