John Nicholson The Lion of the Punjaub 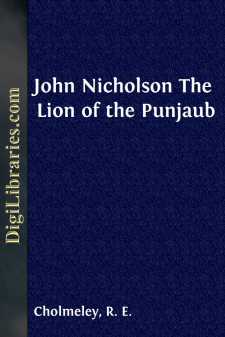 High up on the crest of the wild and rugged Margalla Pass, on the north-western frontier of India, stands a plain stone obelisk. It looks down on to the road that winds from Rawal Pindi to Hasan Abdal, the road where once only the Afghan camel-train passed on its way to and from Peshawur, but where now a railway marks the progress of modern India. Severely simple in its exterior, the obelisk is yet one of the most notable monuments to be seen in our great Eastern Empire, for it commemorates a soldier-hero of high fame. On its base is inscribed the name of John Nicholson.

This Margalla monument is not the only memorial to Nicholson in India: there is a tablet to his memory in a church at Bannu, the scene of his administrative work; and there is at Delhi, where he lies buried, a fine bronze statue of recent erection. But the stone obelisk in the frontier pass will stand for ever as the most striking tribute to the man who played so prominent a part in the saving of India. Its very position appeals strongly to the imagination. Here it was, in the district which he ruled so wisely and well, that Nicholson's early reputation was made; and here it is that among the wild tribesmen whom he tamed to his will his memory is still fondly cherished.

Who was John Nicholson? The question may well rise to the lips of many, for the writers of history textbooks have hitherto done him scant justice. And yet the tale of the Great Mutiny cannot be properly told without due acknowledgment being made to his genius. Those who know how the fate of India trembled in the balance in those dark days of 1857, know what we owe to him among other strong men whom the occasion brought to the front. It is now fifty years since Nicholson fell in the hour of victory at Delhi; the present year is, therefore, a fitting time to retell the story of his short but glorious career.

Like his distinguished chief, Sir Henry Lawrence, John Nicholson was an Irishman. He was born, in December 1822, at Lisburn, near Belfast, where his father, Dr. Alexander Nicholson, had a flourishing practice. On the paternal side he came of a family which had been established in Ireland since the sixteenth century, while through his mother, who was a Miss Hogg, he was connected with a well-known Ulster family, of which the late Lord Magheramorne was a representative.

Of young John's early life several stories have been preserved which give some indication of his character. According to Sir John Kaye, he was "a precocious boy almost from his cradle; thoughtful, studious, of an inquiring nature; and he had the ineffable benefit of good parental teaching of the best kind." Both his father and mother were deeply religious people, and their children—seven in all—were brought up with an intimate knowledge of the Bible. One day, it is said, when John was three years old, Mrs. Nicholson found him alone in a room with a knotted handkerchief in his hand and striking furiously at some invisible object. On being asked what he was doing, John answered, "Oh, mamma dear, I am trying to get a blow at the devil!...