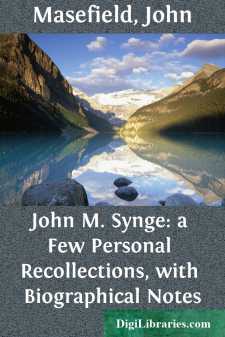 I first met John M. Synge at the room of a common friend, up two pairs of stairs, in an old house in Bloomsbury, on a Monday night of January, 1903. When I entered the room, he was sitting in a rush-bottomed chair, talking to a young man just down from Oxford. My host introduced me, with the remark that he wanted us to know each other.

Synge stood up to shake hands with me. He was of the middle height, about five feet eight or nine. My first impression of him was of a dark, grave face, with a great deal in it, changing from the liveliness of conversation to a gravity of scrutiny. After we had shaken hands, I passed to the other end of the room to greet other friends. We did not speak to each other again that night.

When I sat at the other end of the room my chair was opposite Synge's chair. Whenever I raised my eyes I saw him, and wondered who he could be. Disordered people look disordered, unusual people look unusual. A youth with long hair, a velvet coat, extravagant manners, and the other effeminacies of emptiness looks the charlatan he is. Synge gave one from the first the impression of a strange personality. He was of a dark type of Irishman, though not black-haired. Something in his air gave one the fancy that his face was dark from gravity. Gravity filled the face and haunted it, as though the man behind were forever listening to life's case before passing judgment. It was "a dark, grave face, with a great deal in it." The hair was worn neither short nor long. The moustache was rather thick and heavy. The lower jaw, otherwise clean-shaven, was made remarkable by a tuft of hair, too small to be called a goatee, upon the lower lip. The head was of a good size. There was nothing niggardly, nothing abundant about it. The face was pale, the cheeks were rather drawn. In my memory they were rather seamed and old-looking. The eyes were at once smoky and kindling. The mouth, not well seen below the moustache, had a great play of humour on it. But for this humorous mouth, the kindling in the eyes, and something not robust in his build, he would have been more like a Scotchman than an Irishman.

I remember wondering if he were Irish. His voice, very guttural and quick, with a kind of lively bitterness in it, was of a kind of Irish voice new to me at that time. I had known a good many Irish people; but they had all been vivacious and picturesque, rapid in intellectual argument, and vague about life. There was nothing vivacious, picturesque, rapid or vague about Synge. The rush-bottomed chair next to him was filled by talker after talker, but Synge was not talking, he was answering. When someone spoke to him he answered with the grave Irish courtesy. He offered nothing of his own. When the talk became general he was silent. Sometimes he went to a reddish earthenware pot upon the table, took out a cigarette and lit it at a candle. Then he sat smoking, pushed back a little from the circle, gravely watching. Sometimes I heard his deep, grave voice assenting 'Ye-es, ye-es,' with meditative boredom. Sometimes his little finger flicked off the ash on to the floor. His manner was that of a man too much interested in the life about him to wish to be more than a spectator. His interest was in life, not in ideas. He was new to that particular kind of life. Afterwards, when I had come to know him, I heard him sum up every person there with extraordinary point and sparkle....