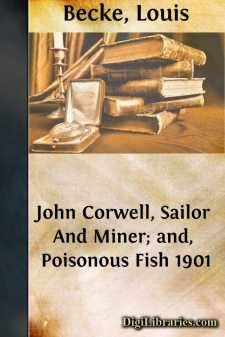 "Am I to have no privacy at all?" demanded the Governor irritably as the orderly again tapped at the open door and announced another visitor. "Who is he and what does he want?"

"Mr. John Corwell, your Excellency, master of the cutter Ceres, from the South Seas."

The Governor's brows relaxed somewhat. "Let him come in in ten minutes, Cleary, but tell him at the same time that I am very tired—too tired to listen unless he has something of importance to say."

The day had indeed been a most tiring one to the worthy Governor of the colony of New South Wales, just then struggling weakly in its infancy, and only emerging from the horrors of actual starvation, caused by the utter neglect of the Home authorities to send out further supplies of provisions. Prisoners of both sexes came in plenty, but brought nothing to eat with them; the military officers who should have helped him in his arduous labours were secretly plotting against him, and their spare time—and they had plenty—was devoted to writing letters home to highly-placed personages imploring them to induce the Government to break up the settlement and not "waste the health and lives of even these abandoned convicts in trying to found a colony in the most awful and hideous desert the eye of man had ever seen, a place which can never be useful to man and is accursed by God." But the Governor took no heed. Mutiny and discontent he had fought in his silent, determined way as he fought grim famine, sparing himself nothing, toiling from dawn till dark, listening to complaints, remedying abuses, punishing with swift severity those who deserved it, and yet always preserving the same cold, unbending dignity of manner which covered a highly-sensitive and deeply sympathetic nature.

But on this particular day, fatigue, the intense heat, which had prevailed, a violent quarrel between the intriguing major commanding the marines, and many other lesser worries, had been almost more than he could bear, so it may well be imagined that he was more inclined for rest than talk.

Ten, twenty minutes, and then the thin, spare figure raised itself wearily from the rude sofa. He must see his visitor. He had promised to do so, and the sooner it was over the better. He called to the orderly.

A heavy step sounded on the bare floor, and one ot the finest specimens of manhood Governor Arthur Phillip had ever seen in all his long naval career stood before him and saluted. There was something so pleasant and yet so manly in the handsome, cleanshaven and deeply-bronzed face, that the Governor was at once attracted to him.

"Be seated, Mr. Corwell," he said in his low, yet clear tones. "I am very tired, so you must not keep me long."

"Certainly not, your Excellency. But I thought, sir, that you would prefer to hear the report of my voyage personally. I have discovered a magnificent harbour north of the Solomon Islands, and——"

"Ha! And so you came to me. Very sensible, very sensible of you. I am obliged to you, sir. Tell me all about it."

"Certainly, your Excellency; but I regret I have intruded on you this evening. Perhaps, sir, you will permit me to call again to-morrow?"