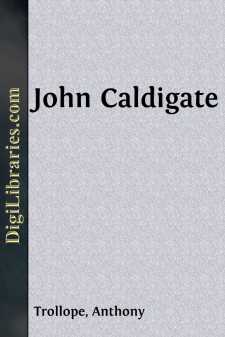 Perhaps it was more the fault of Daniel Caldigate the father than of his son John Caldigate, that they two could not live together in comfort in the days of the young man's early youth. And yet it would have been much for both of them that such comfortable association should have been possible to them. Wherever the fault lay, or the chief fault—for probably there was some on both sides—the misfortune was so great as to bring crushing troubles upon each of them.

There were but the two of which to make a household. When John was fifteen, and had been about a year at Harrow, he lost his mother and his two little sisters almost at a blow. The two girls went first, and the poor mother, who had kept herself alive to see them die, followed them almost instantly. Then Daniel Caldigate had been alone.

And he was a man who knew how to live alone,—a just, hard, unsympathetic man,—of whom his neighbours said, with something of implied reproach, that he bore up strangely when he lost his wife and girls. This they said, because he was to be seen riding about the country, and because he was to be heard talking to the farmers and labourers as though nothing special had happened to him. It was rumoured of him, too, that he was as constant with his books as before; and he had been a man always constant with his books; and also that he had never been seen to shed a tear, or been heard to speak of those who had been taken from him.

He was, in truth, a stout, self-constraining man, silent unless when he had something to say. Then he could become loud enough, or perhaps it might be said, eloquent. To his wife he had been inwardly affectionate, but outwardly almost stern. To his daughters he had been the same,—always anxious for every good thing on their behalf, but never able to make the children conscious of this anxiety. When they were taken from him, he suffered in silence, as such men do suffer; and he suffered the more because he knew well how little of gentleness there had been in his manners with them.

But he had hoped, as he sat alone in his desolate house, that it would be different with him and his only son,—with his son who was now the only thing left to him. But the son was a boy, and he had to look forward to what years might bring him rather than to present happiness from that source. When the boy came home for his holidays, the father would sometimes walk with him, and discourse on certain chosen subjects,—on the politics of the day, in regard to which Mr. Caldigate was an advanced Liberal, on the abomination of the Game Laws, on the folly of Protection, on the antiquated absurdity of a State Church;—as to all which matters his son John lent him a very inattentive ear. Then the lad would escape and kill rabbits, or rats, or even take birds' nests, with a zest for such pursuits which was disgusting to the father, though he would not absolutely forbid them. Then John would be allured to go to his uncle Babington's house, where there was a pony on which he could hunt, and fishing-rods, and a lake with a boat, and three fine bouncing girl-cousins, who made much of him, and called him Jack; so that he soon preferred his uncle Babington's house, and would spend much of his holidays at Babington House....