John Brown An Address at the 14th Anniversary of Storer College 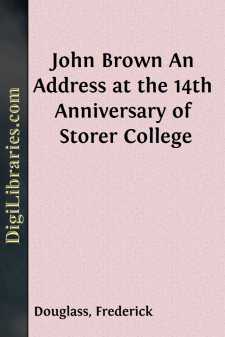 In substance, this address, now for the first time published, was prepared several years ago, and has been delivered in many parts of the North. Its publication now in pamphlet form is due to its delivery at Harper's Ferry, W. Va., on Decoration day, 1881, and to the fact that the proceeds from the sale of it are to be used toward the endowment of a John Brown Professorship in Storer College, Harper's Ferry—an institution mainly devoted to the education of colored youth.

That such an address could be delivered at such a place, at such a time, is strikingly significant, and illustrates the rapid, vast and wonderful changes through which the American people have been passing since 1859. Twenty years ago Frederick Douglass and others were mobbed in the city of Boston, and driven from Tremont Temple for uttering sentiments concerning John Brown similar to those contained in this address. Yet now he goes freely to the very spot where John Brown committed the offense which caused all Virginia to clamor for his life, and without reserve or qualification, commends him as a hero and martyr in the cause of liberty. This incident is rendered all the more significant by the fact that Hon. Andrew Hunter, of Charlestown,—the District Attorney who prosecuted John Brown and secured his execution,—sat on the platform directly behind Mr. Douglass during the delivery of the entire address and at the close of it shook hands with him, and congratulated him, and invited him to Charlestown (where John Brown was hanged), adding that if Robert E. Lee were living, he would give him his hand also.

Not to fan the flame of sectional animosity now happily in the process of rapid and I hope permanent extinction; not to revive and keep alive a sense of shame and remorse for a great national crime, which has brought its own punishment, in loss of treasure, tears and blood; not to recount the long list of wrongs, inflicted on my race during more than two hundred years of merciless bondage; nor yet to draw, from the labyrinths of far-off centuries, incidents and achievements wherewith to rouse your passions, and enkindle your enthusiasm, but to pay a just debt long due, to vindicate in some degree a great historical character, of our own time and country, one with whom I was myself well acquainted, and whose friendship and confidence it was my good fortune to share, and to give you such recollections, impressions and facts, as I can, of a grand, brave and good old man, and especially to promote a better understanding of the raid upon Harper's Ferry of which he was the chief, is the object of this address.

In all the thirty years' conflict with slavery, if we except the late tremendous war, there is no subject which in its interest and importance will be remembered longer, or will form a more thrilling chapter in American history than this strange, wild, bloody and mournful drama. The story of it is still fresh in the minds of many who now hear me, but for the sake of those who may have forgotten its details, and in order to have our subject in its entire range more fully and clearly before us at the outset, I will briefly state the facts in that extraordinary transaction....