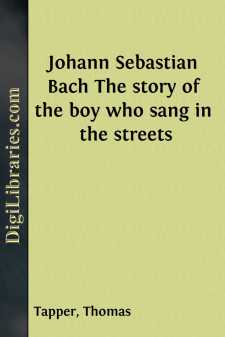 The Story of the Boy Who Sang in the Streets

This is the house in which JOHANN SEBASTIAN BACH was born.

THE HOUSE IN WHICH BACH WAS BORN.

This house stands in the town of Eisenach in Germany. It looks very much the same today as it did when Sebastian was a little boy. Many people go there to visit this house because the little boy grew to be a famous man.

In Eisenach there is a statue of Bach near the palace.

STATUE OF BACH AT EISENACH.

In the same town in which Sebastian was born there stands on the top of a hill a very famous castle built many hundreds of years ago.

This castle is called the Wartburg.

THE CASTLE AT WARTBURG.

As a boy little Sebastian used to climb the hill with his friends, and they, no doubt, had a happy time playing about the castle grounds. In one of its great halls the minstrels of Germany held their Song Contests.

When Sebastian was old enough he used to travel afoot, just as the minstrels did; his purpose was to go to hear fine organ players. Once as he sat weary by the roadside someone threw a herring to him so that he might eat as he rested.

Little Sebastian's father was named JOHANN AMBROSIUS BACH. He, too, was a musician, as his people had been for many years.

One of these was a miller who played and sang while the corn was grinding. His name was Veit Bach, and his little boy was called Hans, the Player, because he, too, loved to play the violin.

VEIT BACH AND HIS SON HANS.

When Sebastian was ten years old his father and mother died. So he went to live with his brother, whose home was a few miles away.

Of this brother Sebastian had music lessons, and he improved so rapidly that he used to beg to be allowed to play the pieces in a big book in the library.

But the brother refused him this pleasure. However, little Sebastian was eager to learn all the music he could find, so he used to sit up on moonlight nights and copy these pages while his brother was asleep.

But what do you think happened when he had copied everything in that big book?

His brother found out what he had done and took all his precious music away from him.

If you know any boy who is about twenty years old you may say to him, Bach was as old as you are when Benjamin Franklin was born in Boston.

And although there was this difference of twenty years or so in their ages, we may think of them at work in the world at the same time. You must remember that all men like Franklin and Bach who became famous did so by working very hard.

Franklin, too, was born very poor. Once he walked the streets of Philadelphia with a loaf of bread under each arm. But by being faithful in all he did he became the friend of all his countrymen and of Kings and Queens besides.

Benjamin Franklin was quite a little younger than Sebastian Bach. But there was a famous man who was almost exactly Sebastian's age. This man composed an Oratorio that is loved by everybody. It is sung in cities and towns all over the world, particularly at Christmas time....