Joan of Arc of the North Woods 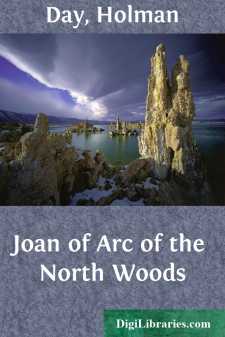 THE timber situation in the Tomah country was surcharged.

When Ward Latisan came upon Rufus Craig, one afternoon in autumn, steel struck flint and trouble’s fuse was lighted.

Their meeting was on the Holeb tote road just below Hagas Falls.

Young Ward was the grandson of old John, a pioneer who was in his day a saw-log baron of the times of pumpkin pine; by heredity Ward was the foremost champion in the cause of the modern independent operators.

In his own way, Craig, the field director of the Comas Consolidated Paper Company, was the chief gladiator for an invading corporation which demanded monopoly of the Tomah timber by absorption of the independents.

Latisan tramped down the tote road from the shoulder of Holeb Mountain, where he had been cruising alone for a week on the Walpole tract, blazing timber for the choppers, marking out twitch roads and haul-downs, locating yards; his short-handled ax was in his belt, his lank haversack flapped on his back; he carried his calipers in one hand; with the other hand he fed himself raisins from his trousers pocket, munching as he went along. He had eaten the last of his scanty supply of biscuits and bacon; but, like other timber cruisers—all of them must travel light—he had his raisins to fall back on, doling them one by one, masticating them thoroughly and finding the nourishment adequate.

He had been on the go every day from sunup till dark; nights he cinched his belted jacket closely and slept as best he could, his back against a tree; he had cruised into every nook and corner of the tract, spending strength prodigally, but when he strode down the tote road his vitality enabled him to hit it off at a brisk gait; his belt was a few holes tighter, yet his fasting made him keenly awake; he was more alert to the joy of being alive in the glory of the crisp day; his cap was in his pocket, his tousled brown hair was rampant; and he welcomed the flood of sunshine on his bronzed face.

Craig was making his way along the tote road in a buckboard, with a driver. The road bristled with rocks and was pitted with hollows; the fat horses dragged their feet at a slow walk. Craig was a big man, a bit paunchy, and he grunted while he was bounced. He wore his city hard hat as if he wished by his headgear to distinguish himself from the herd of woodsmen whom he bossed.

Latisan overtook the toiling buckboard, and his stride was taking him past when Craig hailed.

“No—thank you!” The negative was sharp. Privation and toil had put an edge on the young man’s temper, and the temper was not amiable where Craig was concerned.

“I’ve got some business to talk with you, Latisan.”

“If that’s so I can listen while I walk alongside.”

But Craig ordered the driver to halt. Then the Comas director swung around and faced Latisan. “I’m putting it up to you again—will you and your father sell to the Comas?”

“What is it going to be—a fight to a finish?”

“If you keep your hands off us saw-log fellows, Mr. Craig, there’ll be no fight. We were here first, you know!”

“That’s got nothing to do with the present situation, Latisan. We’ve built a million-dollar paper mill on the Toban, and it’s up to me to feed it with pulp stuff. We can’t lug our plant off in a shawl strap if supply fails.”

“Nor can the folks who have built villages around the sawmills lug away their houses if the mills are closed.”

“Paper dominates in this valley nowadays, instead of lumber. Latisan, you’re old-fashioned!”

“You stand to lose money in the lumber market, with conditions as they are,” proceeded Craig, loftily counseling another man about his own business. The Comas director, intent on consolidation, had persistently failed to understand the loyalty, half romantic, which was actuating the old-line employers to protect faithful householders....