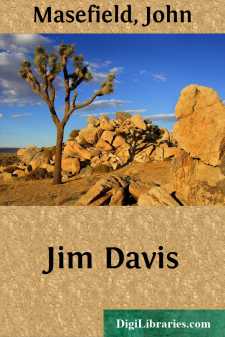 CHAPTER I MY FIRST JOURNEY

I was born in the year 1800, in the town of Newnham-on-Severn, in Gloucestershire. I am sure of the year, because my father always told me that I was born at the end of the century, in the year that they began to build the great house. The house has been finished now these many years. The red-brick wall, which shuts its garden from the road (and the Severn), is all covered with valerian and creeping plants. One of my earliest memories is of the masons at work, shaping the two great bows. I remember how my nurse used to stop to watch them, at the corner of the road, on the green strip by the river-bank, where the gipsies camped on the way to Gloucester horse-fair. One of the masons was her sweetheart (Tom Farrell his name was), but he got into bad ways, I remember, and was hanged or transported, though that was years afterwards, when I had left that countryside.

My father and mother died when I was still a boy—my mother on the day of Trafalgar battle, in 1805, my father four years later. It was very sad at home after mother died; my father shut himself up in his study, never seeing anybody. When my father died, my uncle came to Newnham from his home in Devonshire; my old home was sold then, and I was taken away. I remember the day so very clearly. It was one sunny morning in early April. My uncle and I caught the coach at the top of the hill, at the door of the old inn opposite the church. The coachman had a hot drink handed up to him, and the ostlers hitched up the new team. Then the guard (he had a red coat, like a soldier) blew his horn, and the coach started off down the hill, going so very fast that I was afraid, for I had never ridden on a coach before, though I had seen them every day. The last that I saw of Newnham was the great house at the corner. It was finished by that time, of course, and as we drove past I saw the beautiful woman who lived there walking up and down the lawn with her husband, Captain Rylands, a very tall, handsome man, who used to give me apples. I was always afraid to eat the apples, because my nurse said that the Captain had killed a man. That was in the wars in Spain, fighting against the French.

I remember a great deal about my first coach-ride. We slept that night at Bristol in one of the famous coaching inns, where, as a great treat, I had bacon and eggs for supper, instead of bread-and-milk. In the morning, my uncle took me with him to the docks, where he had some business to do. That was the first time I ever really saw big ships, and that was the first time I spoke with the sailors. There was a capstan on one of the wharves, and men were at work, heaving round it, hoisting casks out of a West Indiaman. One of the men said, "Come on, young master; give us a hand on the bar here." So I put my hands on to the bar and pushed my best, walking beside him till my uncle called me away. There were many ships there at the time, all a West Indian convoy, and it was fine to see their great figureheads, and the brass cannon at the ports, and to hear the men singing out aloft as they shifted spars and bent and unbent sails....