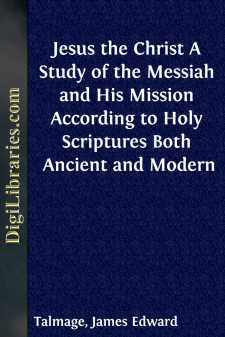 It is a matter of history that, at or near the beginning of what has since come to be known as the Christian era, the Man Jesus, surnamed the Christ, was born in Bethlehem of Judea. The principal data as to His birth, life, and death are so well attested as to be reasonably indisputable; they are facts of record, and are accepted as essentially authentic by the civilized world at large. True, there are diversities of deduction based on alleged discrepancies in the records of the past as to circumstantial details; but such differences are of strictly minor importance, for none of them nor all taken together cast a shadow of rational doubt upon the historicity of the earthly existence of the Man known in literature as Jesus of Nazareth.

As to who and what He was there are dissensions of grave moment dividing the opinions of men; and this divergence of conception and belief is most pronounced upon those matters to which the greatest importance attaches. The solemn testimonies of millions dead and of millions living unite in proclaiming Him as divine, the Son of the Living God, the Redeemer and Savior of the human race, the Eternal Judge of the souls of men, the Chosen and Anointed of the Father—in short, the Christ. Others there are who deny His Godhood while extolling the transcendent qualities of His unparalleled and unapproachable Manhood.

To the student of history this Man among men stands first, foremost, and alone, as a directing personality in the world's progression. Mankind has never produced a leader to rank with Him. Regarded solely as a historic personage He is unique. Judged by the standard of human estimation, Jesus of Nazareth is supreme among men by reason of the excellence of His personal character, the simplicity, beauty, and genuine worth of His precepts, and the influence of His example and doctrines in the advancement of the race. To these distinguishing characteristics of surpassing greatness the devout Christian soul adds an attribute that far exceeds the sum of all the others—the divinity of Christ's origin and the eternal reality of His status as Lord and God.

Christian and unbeliever alike acknowledge His supremacy as a Man, and respect the epoch-making significance of His birth. Christ was born in the meridian of time; and His life on earth marked at once the culmination of the past and the inauguration of an era distinctive in human hope, endeavor, and achievement. His advent determined a new order in the reckoning of the years; and by common consent the centuries antedating His birth have been counted backward from the pivotal event and are designated accordingly. The rise and fall of dynasties, the birth and dissolution of nations, all the cycles of history as to war and peace, as to prosperity and adversity, as to health and pestilence, seasons of plenty and of famine, the awful happenings of earthquake and storm, the triumphs of invention and discovery, the epochs of man's development in godliness and the long periods of his dwindling in unbelief—all the occurrences that make history—are chronicled throughout Christendom by reference to the year before or after the birth of Jesus Christ....