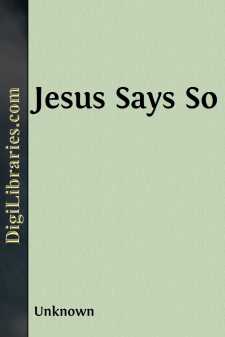 Sarah G—— was one of several children, living with their parents in a narrow lane in London. Early in the year 1847, Sarah's father had met with a serious accident, and was then in the hospital, where he remained for many weeks a severe sufferer. Sarah and her brothers, deprived of the usual means of support, and their mother being in constant attendance on her husband, were consequently often left in great necessity. More than once have these little ones been known to reach the hour of four or five in the afternoon, before taking any food; but amidst all their privations, no complaint was heard from the lips of Sarah. It was not known until after her death, how silently, yet how powerfully, the Spirit of God was, even at this time, working in her heart.

There was nothing particularly attractive in her appearance; quiet and unobtrusive, she seemed to the outward observer like most other children; but "the Lord seeth not as man seeth." The Great Shepherd of the sheep had his eye on this little lamb of the fold, and marked her for his own. At home she was gentle and affectionate, obedient to her parents, and during their absence she watched kindly over her little brothers.

Her poor family tasted largely of the cup of sorrow, but poverty and distress, instead of producing impatience and unkindness, seemed to bind each one more closely to the other. They experienced the truth of those words: "Better is a dinner of herbs where love is, than a stalled ox and hatred therewith," Prov. 15:17. "Better is a dry morsel, and quietness therewith, than a house full of sacrifices with strife," Prov. 17:1.

The death of her youngest brother appeared to make a strong impression on Sarah's mind; she said she liked to think she had a brother in heaven. Soon after that event, she was admitted into a Sabbath school, and it was her delight in the week to prepare her lessons. "Sunday is such a happy day," she would say; and on that morning she would rise earlier than usual to get ready for school.

A little circumstance, which occurred at this time, marked her tenderness of conscience. A new bonnet had been promised to her, but not arriving at the time she had hoped, her disappointment was so great that she shed many tears. This was mentioned to a friend, who talked to her about it. Sarah made no remark at the time, but afterwards she said to her mother, "I did not know before that it was wrong to cry when we were disappointed; I will try not to do so again:" and in the evening her father overheard her begging God to forgive her pride and fretting about the bonnet.

Another feature in Sarah's character may be here noticed: this was her love of truth. "She has never deceived me," was her mother's frequent remark. "I cannot remember a single instance of untruth, even in play," and perhaps this truthfulness of spirit enabled her the more readily to trust the word of another. "She promised me," Sarah would say, and on the promise she would ever rest, in all the sweet dependence of a child....