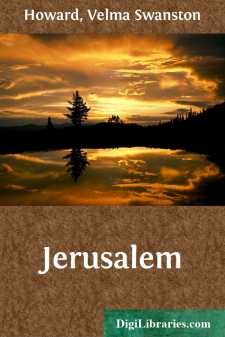 As yet the only woman winner of the Nobel Prize for Literature, the prize awarded to Kipling, Maeterlinck, and Hauptmann, is the Swedish author of this book, "Jerusalem." The Swedish Academy, in recognizing Miss Selma Lagerlöf, declared that they did so "for reason of the noble idealism, the wealth of imagination, the soulful quality of style, which characterize her works." Five years later, in 1914, that august body elected Doctor Lagerlöf into their fellowship, and she is thus the only woman among those eighteen "immortals."

What is the secret of the power that has made Miss Lagerlöf an author acknowledged not alone as a classic in the schools but also as the most popular and generally beloved writer in Scandinavia? She entered Swedish literature at a period when the cold gray star of realism was in the ascendant, when the trenchant pen of Strindberg had swept away the cobwebs of unreality, and people were accustomed to plays and novels almost brutal in their frankness. Wrapped in the mantle of a latter-day romanticism, her soul filled with idealism, on the one hand she transformed the crisp actualities of human experience by throwing about them the glamour of the unknown, and on the other hand gave to the unreal—to folk tale and fairy lore and local superstition—the effectiveness of convincing fact. "Selma Lagerlöf," says the Swedish composer, Hugo Alfvén, "is like sitting in the dusk of a Spanish cathedral … afterward one does not know whether what he has seen was dream or reality, but certainly he has been on holy ground." The average mind, whether Swedish or Anglo-Saxon, soon wearies of heartless preciseness in literature and welcomes an idealism as wholesome as that of Miss Lagerlöf. Furthermore, the Swedish authoress attracts her readers by a diction unique unto herself, as singular as the English sentences of Charles Lamb. Her style may be described as prose rhapsody held in restraint, at times passionately breaking its bonds.

Miss Lagerlöf has not been without her share of life's perplexities and of contact with her fellowmen, it is by intuition that she works rather than by experience. Otherwise, she could not have depicted in her books such a multitude of characters from all parts of Europe. She sees character with woman's warm and delicate sympathy and with the clear vision of childhood. "Selma Lagerlöf," declared the Swedish critic, Oscar Levertin, "has the eyes of a child and the heart of a child." This naïveté is responsible for the simplicity of her character types. Deep and sure they may be, but never too complex for the reader to comprehend. The more varied characters—as the critic Johan Mortensen has pointed out—like Hellgum, the mystic in "Jerusalem," are merely indicated and shadowy. How unlike Ibsen! Selma Lagerlöf takes her delight, not in developing the psychology of the unusual, but in analyzing the motives and emotions of the normal mind. This accounts for the comforting feeling of satisfaction and familiarity which comes over one reading the chronicles of events so exceptionable as those which occur in "Jerusalem."

In one of her books, "The Wonderful Adventures of Nils," Miss Lagerlöf has sketched the national character of mart Swedish people in reference to the various landscapes visited by the wild goose in its flight....