Jerome, A Poor Man A Novel 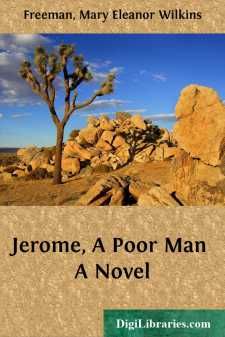 One morning in early May, when the wind was cold and the sun hot, and Jerome about twelve years old, he was in a favorite lurking-place of his, which nobody but himself knew.

Three fields' width to the northward from the Edwardses' house was a great rock ledge; on the southern side of it was a famous warm hiding-place for a boy on a windy spring day. There was a hollow in the rock for a space as tall as Jerome, and the ledge extended itself beyond it like a sheltering granite wing to the westward.

The cold northwester blowing from over the lingering Canadian snow-banks could not touch him, and he had the full benefit of the sun as it veered imperceptibly south from east. He lay there basking in it like some little animal which had crawled out from its winter nest. Before him stretched the fields, all flushed with young green. On the side of a gentle hill at the left a file of blooming peach-trees looked as if they were moving down the slope to some imperious march music of the spring.

In the distance a man was at work with plough and horse. His shouts came faintly across, like the ever-present notes of labor in all the harmonies of life. The only habitation in sight was Squire Eben Merritt's, and of that only the broad slants of shingled roof and gray end wall of the barn, with a pink spray of peach-trees against it.

Jerome stared out at it all, without a thought concerning it in his brain. He was actively conscious only of his own existence, which had just then a wondrously pleasant savor for him. A sweet exhilarating fire seemed leaping through every vein in his little body. He was drowsy, and yet more fully awake than he had been all winter. All his pulses tingled, and his thoughts were overborne by the ecstasy in them. Jerome had scarcely felt thoroughly warm before, since last summer. That same little, tight, and threadbare jacket had been his thickest garment all winter. The wood had been stinted on the hearth, the coverings on his bed; but now the full privilege of the spring sun was his, and the blood in this little meagre human plant, chilled and torpid with the winter's frosts, stirred and flowed like that in any other. Who could say that the bliss of renewed vitality which the boy felt, as he rested there in his snug rock, was not identical with that of the springing grass and the flowering peach-trees? Who could say that he was more to all intents and purposes, for that minute, than the rock-honeysuckle opening its red cups on the ledge over his head? He was conscious of no more memory or forethought.

Presently he shut his eyes, and the sunlight came in a soft rosy glow through his closed lids. Then it was that a little girl came across the fields, clambering cautiously over the stone walls, lest she should tear her gown, stepping softly over the green grass in her little morocco shoes, and finally stood still in front of the boy sitting with his eyes closed in the hollow of the rock. Twice she opened her mouth to speak, then shut it again....