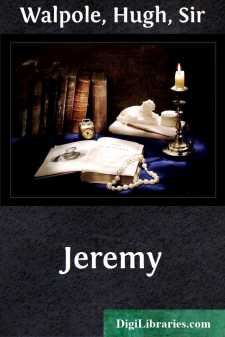 CHAPTER I. THE BIRTHDAY I

About thirty years ago there was at the top of the right-hand side of Orange Street, in Polchester, a large stone house. I say "was"; the shell of it is still there, and the people who now live in it are quite unaware, I suppose, that anything has happened to the inside of it, except that they are certainly assured that their furniture is vastly superior to the furniture of their predecessors. They have a gramophone, a pianola, and a lift to bring the plates from the kitchen into the dining-room, and a small motor garage at the back where the old pump used to be, and a very modern rock garden where once was the pond with the fountain that never worked. Let them cherish their satisfaction. No one grudges it to them. The Coles were, by modern standards, old-fashioned people, and the Stone House was an old-fashioned house.

Young Jeremy Cole was born there in the year 1884, very early in the morning of December 8th. He was still there very early in the morning of December 8th, 1892. He was sitting up in bed. The cuckoo clock had just struck five, and he was aware that he was, at this very moment, for the first time in his life, eight years old. He had gone to bed at eight o'clock on the preceding evening with the choking consciousness that he would awake in the morning a different creature. Although he had slept, there had permeated the texture of his dreams that same choking excitement, and now, wide awake, as though he had asked the cuckoo to call him in order that he might not be late for the great occasion, he stared into the black distance of his bedroom and reflected, with a beating heart, upon the great event. He was eight years old, and he had as much right now to the nursery arm-chair with a hole in it as Helen had.

That was his first definite realisation of approaching triumph. Throughout the whole of his seventh year he had fought with Helen, who was most unjustly a year older than he and persistently proud of that injustice, as to his right to use the wicker arm-chair whensoever it pleased him. So destructive of the general peace of the house had these incessant battles been, so unavailing the suggestions of elderly relations that gentlemen always yielded to ladies, that a compromise had been arrived at. When Jeremy was eight he should have equal rights with Helen. Well and good. Jeremy had yielded to that. It was the only decent chair in the nursery. Into the place where the wicker, yielding to rude and impulsive pressure, had fallen away, one's body might be most happily fitted. It was of exactly the right height; it made the handsomest creaking noises when one rocked in it—and, in any case, Helen was only a girl.

But the sense of his triumph had not yet fully descended upon him. As he sat up in bed, yawning, with a tickle in the middle of his back and his throat very dry; he was disappointingly aware that he was still the same Jeremy of yesterday. He did not know what it was exactly that he had expected, but he did not feel at present that confident proud glory for which he had been prepared....