Jeff Benson, or the Young Coastguardsman 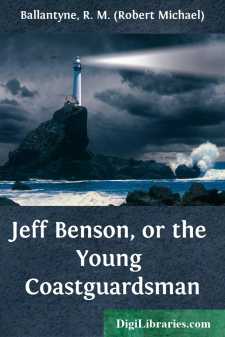 Our Hero Introduced with some of his Friends.

A poor schoolmaster named Benson died, not long ago, in a little town on the south-east coast of England, which shall be called Cranby.

He left an only son, Jeffrey, and an elder brother, Jacob, to mourn his loss. The son mourned for his father profoundly, for he loved him much. The brother mourned him moderately, for he was a close-fisted, hard-hearted, stern man of the law, whose little soul, enclosed in a large body, had not risen to the conception of any nobler aim in life than the acquisition of wealth, or any higher enjoyment than a social evening with men like himself.

The son Jeffrey was a free-and-easy, hearty, good-natured lad, with an overgrown and handsome person, an enthusiastic spirit, a strong will, and a thorough belief in his own ability to achieve anything to which he chose to set his mind.

Up to the time of his father’s death, Jeff’s main idea of the desirable in life was—fun! Fun in all its more innocent phases seemed to him the sum of what was wanted by man. He had experienced it in all its scholastic forms ever since he was a little boy; and even when, at the mature age of fifteen, he was promoted to the rank of usher in his father’s school, his chief source of solace and relaxation was the old play-ground, where he naturally reigned supreme, being the best runner, rower, wrestler, jumper, gymnast, and, generally, the best fellow in the school.

He had never known a mother’s love, and his father’s death was the first blow that helped to shatter his early notions of felicity. The cloud that overshadowed him at that time was very dark, and he received no sympathy worth mentioning from his only relative, the solicitor.

“Well, Jeff, what d’you think of doing?” asked that austere relative, two days after the funeral. “Of course at your age you can’t carry on the school alone.”

“Of course not,” answered the boy, with a suppressed sob.

“What say you to entering my office and becoming a lawyer, Jeff?”

“What will you do, then?” demanded the uncle, somewhat offended at this flat rejection of his proposal.

The lad thought for a moment, and then said quietly but decidedly, “I’ll go to sea.”

“Go to the world’s end if you like,” returned the uncle, who was proud and touchy, and hated the sea; “but don’t ask me to help you.”

“Thank you, uncle,” replied the lad, who was as proud as himself, though not touchy, and had a strong affection for the sea; “having no particular business at the world’s end just now, I’ll put off my visit to a more convenient season.”

They parted, and we need scarcely add that the brief intercourse of uncle and nephew which had thus suddenly begun as suddenly ceased.

It is not usually difficult for a strong, active lad, with merry black eyes and cheery manners, to obtain employment. At least Jeffrey Benson did not find it so. A few miles from his native town there was a seaport. Thither he repaired, and looked about him....