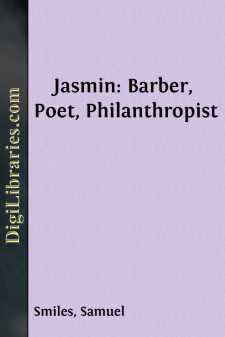 My attention was first called to the works of the poet Jasmin by the eulogistic articles which appeared in the Revue des Deux Mondes, by De Mazade, Nodier, Villemain, and other well-known reviewers.

I afterwards read the articles by Sainte-Beuve, perhaps the finest critic of French literature, on the life and history of Jasmin, in his 'Portraits Contemporains' as well as his admirable article on the same subject, in the 'Causeries du Lundi.'

While Jasmin was still alive, a translation was published by the American poet Longfellow, of 'The Blind Girl of Castel-Cuille,' perhaps the best of Jasmin's poems. In his note to the translation, Longfellow said that "Jasmin, the author of this beautiful poem, is to the South of France what Burns is to the South of Scotland, the representative of the heart of the people; one of those happy bards who are born with their mouths full of birds (la bouco pleno d'aouvelous). He has written his own biography in a poetic form, and the simple narrative of his poverty, his struggles, and his triumphs, is very touching. He still lives at Agen, on the Garonne; and long may he live there to delight his native land with native songs."

I had some difficulty in obtaining Jasmin's poems; but at length I received them from his native town of Agen. They consisted of four volumes octavo, though they were still incomplete. But a new edition has since been published, in 1889, which was heralded by an interesting article in the Paris Figaro.

While at Royat, in 1888, I went across the country to Agen, the town in which Jasmin was born, lived, and died. I saw the little room in which he was born, the banks of the Garonne which sounded so sweetly in his ears, the heights of the Hermitage where he played when a boy, the Petite Seminaire in which he was partly educated, the coiffeur's shop in which he carried on his business as a barber and hair-dresser, and finally his tomb in the cemetery where he was buried with all the honours that his towns-fellows could bestow upon him.

From Agen I went south to Toulouse, where I saw the large room in the Museum in which Jasmin first recited his poem of 'Franconnette'; and the hall in the Capitol, where the poet was hailed as The Troubadour, and enrolled member of the Academy of Jeux Floraux—perhaps the crowning event of his life.

In the Appendix to this memoir I have endeavoured to give translations from some of Jasmin's poems. Longfellow's translation of 'The Blind Girl of Castel-Cuille' has not been given, as it has already been published in his poems, which are in nearly every library. In those which have been given, I have in certain cases taken advantage of the translations by Miss Costello Miss Preston (of Boston, U.S.), and the Reverend Mr. Craig, D.D., for some time Rector of Kinsale, Ireland.

It is, however, very difficult to translate French poetry into English. The languages, especially the Gascon, are very unlike French as well as English. Hence Villemain remarks, that "every translation must virtually be a new creation." But, such as they are, I have endeavoured to translate the poems as literally as possible. Jasmin's poetry is rather wordy, and requires condensation, though it is admirably suited for recitation....