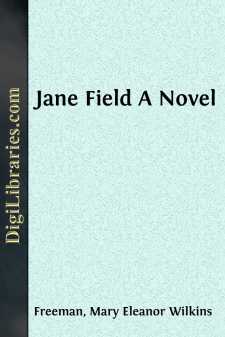 Amanda Pratt's cottage-house was raised upon two banks above the road-level. Here and there the banks showed irregular patches of yellow-green, where a little milky-stemmed plant grew. It had come up every spring since Amanda could remember.

There was a great pink-lined shell on each side of the front door-step, and the path down over the banks to the road was bordered with smaller shells. The house was white, and the front door was dark green, with an old-fashioned knocker in the centre.

There were four front windows, and the roof sloped down to them; two were in Amanda's parlor, and two were in Mrs. Field's. She rented half of her house to Mrs. Jane Field.

There was a head at each of Amanda's front windows. One was hers, the other was Mrs. Babcock's. Amanda's old blond face, with its folds of yellow-gray hair over the ears and sections of the softly-wrinkled, pinky cheeks, was bent over some needle-work. So was Mrs. Babcock's, darkly dim with age, as if the hearth-fires of her life had always smoked, with a loose flabbiness about the jaw-bones, which seemed to make more evident the firm structure underneath.

Amanda was sewing a braided rug; her little veiny hands jerked the stout thread through with a nervous energy that was out of accord with her calm expression and the droop of her long slender body.

“I don't care how hard 'tis if I can get 'em sewed strong,” replied Amanda, and her voice was unexpectedly quick and decided. “I never had any feelin' that anything was hard, if I could only do it.”

“Well, you ain't had so much hard work to do as some folks. Settin' in a rockin'-chair sewin' braided mats ain't like doin' the housework for a whole family. If you'd had the cookin' to do for four men-folks, the way I have, you'd felt it was pretty hard work, even if you did make out to fill 'em up.” Mrs. Babcock smiled, and showed that she did not forget she was company, but her tone was quite fierce.

“Mebbe I should,” returned Amanda, stiffly.

There was a silence.

“Let me see, how many mats does that make?” Mrs. Babcock asked, finally, in an amiable voice.

“This makes the ninth.”

Mrs. Babcock scrutinized the floor. It was almost covered with braided rugs, and they were all alike.

“I declare I don't see where you'll put another in here,” said she.

“I guess I can lay 'em a little thicker over there by the what-not.”

“Well, mebbe you can; but I declare I shouldn't scarcely think you needed another. I shouldn't think your carpet would wear out till the day of judgment. What made you have them mats all jest alike?”

“I like 'em better so,” replied Amanda, with dignity.

“Well, of course, if you do there ain't nothin' to say; it's your carpet an' your mats,” returned Mrs. Babcock, with grim apology.

There were two curious features about Amanda Pratt's parlor: one was a gentle monotony of details; the other, a certain savor of the sea....