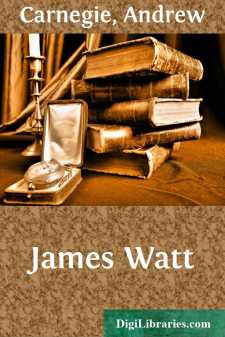 James Watt, born in Greenock, January 19, 1736, had the advantage, so highly prized in Scotland, of being of good kith and kin. He had indeed come from a good nest. His great-grandfather, a stern Covenanter, was killed at Bridge of Dee, September 12, 1644, in one of the battles which Graham of Claverhouse fought against the Scotch. He was a farmer in Aberdeenshire, and upon his death the family was driven out of its homestead and forced to leave the district.

Watt's grandfather, Thomas Watt, was born in 1642, and found his way to Crawford's Dyke, then adjoining, and now part of, Greenock, where he founded a school of mathematics, and taught this branch, and also that of navigation, to the fishermen and seamen of the locality. That he succeeded in this field in so little and poor a community is no small tribute to his powers. He was a man of decided ability and great natural shrewdness, and very soon began to climb, as such men do. The landlord of the district appointed him his Baron Bailie, an office which then had important judicial functions. He rose to high position in the town, being Bailie and Elder, and was highly respected and honored. He subsequently purchased a home in Greenock and settled there, becoming one of its first citizens. Before his death he had established a considerable business in odds and ends, such as repairing and provisioning ships; repairing instruments of navigation, compasses, quadrants, etc., always receiving special attention at his hands.

The sturdy son of a sturdy Covenanter, he refused to take the test in favor of prelacy (1683), and was therefore proclaimed to be "a disorderly school-master officiating contrary to law." He continued to teach, however, and a few years later the Kirk Session of Greenock, notwithstanding his contumacy, found him "blameless in life and conversation," and appointed him an Elder, which required him to overlook not only religious observances, but the manners and morals of the people. One of the most important of these duties was to provide for the education of the young, in pursuance of that invaluable injunction of John Knox, "that no father, of what estate or condition that ever he may be, use his children at his own fantasie, especially in their youthhood, but all must be compelled to bring up their children in learning and virtue." Here we have, at its very birth, the doctrine of compulsory education for all the people, the secret of Scotland's progress. Great as was the service Knox rendered in the field ecclesiastical, probably what he did for the cause of public education excels it. The man who proclaimed that he would never rest until there was a public school in every parish in Scotland must stand for all time as one of the foremost of her benefactors; probably, in the extent and quality of the influence he exerted upon the national character through universal compulsory education, the foremost of all.

The very year after Parliament passed the Act of 1696, which at last fulfilled Knox's aspirations, and during the Eldership of Watt's grandfather, Greenock made prompt provision for her parish school, in which we may be sure the old "teacher of mathematics" did not fail to take a prominent part.

Thomas Watt's son, the father of the great inventor, followed in his father's footsteps, after his father's death, as shipwright, contractor, provider, etc., becoming famous for his skill in the making of the most delicate instruments. He built shops at the back of his house, and such were the demands upon him that he was able to keep a number of men, sometimes as many as fourteen, constantly at work. Like his father, he became a man of position and influence in the community, and was universally esteemed. Prosperity attended him until after the birth of his famous son. The loss of a valuable ship, succeeded by other misfortunes, swept away most of the considerable sum which he had made, and it was resolved that James would have to be taught a trade, instead of succeeding to the business, as had been the intention.

Fortunate it was for our subject, and especially so for the world, that he was thus favored by falling heir to the best heritage of all, as Mr....