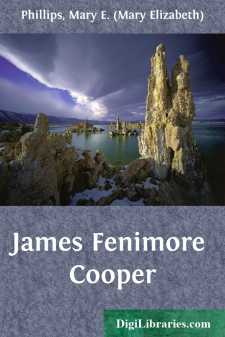 The light of this world fell on James Fenimore Cooper September 15, 1789. The founder of American romance was born in a quaint, two-storied house of stuccoed brick which now numbers 457 Main St., Burlington, New Jersey. It was then "the last house but one as you go into the country" and among the best of the town. In a like house next door lived the father of the naval hero, Capt. James Lawrence. These two houses opened directly on the street and their slanting roofs were shaded by tall trees rooted at the curbstones. This outline of Fenimore Cooper's birthplace is from the text-picture in "Literary Rambles," by Theodore F. Wolfe, M.D., Ph.D. The first of his father's family in this new country was James Cooper, who came from Stratford-on-Avon, England, in 1679. He and his wife were Quakers, and with Quaker thrift bought wide tracts of land in New Jersey and Pennsylvania. Seventy-five years after James Cooper stepped on American soil his great-grandson William was born, December 2, 1754, in Byberry township, Pennsylvania.

On December 12, 1775, at Burlington, New Jersey, William Cooper married Elizabeth, daughter of Richard Fenimore, whose family came from Oxfordshire of Old England, and, at intervals, held office in her provinces. James, the future author and named for his grandfather Cooper, was the eleventh of twelve children. About 1807 Cooper, by request of his mother, said he would adopt the name of Fenimore as there were no men of her family to continue it. The change was delayed by the untimely death of Judge Cooper, and also to make less difficult the settlement of his large estate. But in 1826 James Cooper applied to the legislature for his change of name to James Cooper Fenimore. This request was not granted, but the change to "James Fenimore Cooper" was made. Cooper's comment on this outcome is a graphic record and "suggests," says an authority, that "the legislature would do well to assume that a petitioner, in such a case, knew better than they did what he wanted." The hyphen, at first used, was soon dropped. And so it was for his mother's sake that he made world-wide his fame by the name of James Fenimore Cooper.

"The Fenimore Box" is an "English measure box, curious, and centuries old, brought over by the first of the name." It descended to Cooper from his mother, Elizabeth Fenimore, and is now treasured as a family heirloom by his grandson, James Fenimore Cooper of Albany, New York.

As the first James Cooper and his wife were Quakers, perchance the same Quaker thrift influenced William Cooper to follow the lead of George Washington, who, two years before, in order to find out the inland waterways of our country, came from the Mohawk Valley to the headwaters of the Susquehanna—this stream which Fenimore Cooper called "the crooked river to which the Atlantic herself extended an arm of welcome."

Lake Otsego—the "Glimmerglass"—William Cooper saw first in the autumn of 1785. "Mt. Vision" was covered with a forest growth so dense that he had to "climb a tree in order to get a view of the lake, and while up the tree" he saw a deer come down "from the thickets and quietly drink of its waters near Otsego Rock." "Just where the Susquehanna leaves the Lake on its long journey to the sea" this famous Council Rock "still shows its chin above the water and marks the spot where Deerslayer met Chingachgook the Great Serpent of the Delawares."

Now "its lake margin belongs to a grandson of the author, who also bears his name," is a record found in Dr....