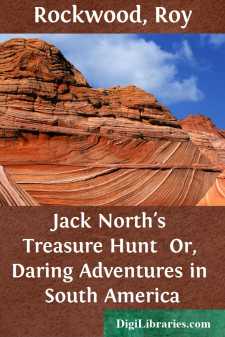 A Chance for a Position

"Where are you going, Jack?"

"To the shops of John Fowler & Company."

"Then you are in luck, for I heard this morning that they want another striker in the lower shop at once."

"Then I'll <i>strike</i> for the opening at once, and my name is not JackNorth if I don't land it."

"It will be John Slowshanks when you do get it, mind me!" cried out another voice, from an alley-way near at hand, and before Jack North or his companion could recover from their surprise the speaker, a tall, awkward youth of twenty, sped up the street at the top of his speed.

The scene was in Bauton, a large manufacturing city of New England. The first speaker was a workman at the shops that had been mentioned, but beyond the fact that he placed the youth before him in the way of getting work, he needs no special introduction.

The other person was a lad of eighteen, with brown, curly hair, blue eyes, and a round, robust figure. His name was John North, and he was the son of a couple in humble circumstances.

"Take care!" cried the man, "that sneak will get in ahead of you, and then a snap of your little finger for your chance of getting the job at Fowler's."

Jack North did not stop to hear his friend through. He was very much in need of a situation, and he knew the young man who had rushed in ahead of him as a bitter enemy. That fact, coupled with his desire to get work, caused him to dash up the street as fast as he could run.

Naturally the appearance of the two running at such a headlong pace aroused the attention of the passers-by, all of whom stopped to see what it meant. Others rushed out of their houses, offices or workshops to ascertain the meaning of the race, until the street was lined with excited, anxious men, women and children.

"Is it fire?" asked an old, gray-headed man, and another, catching only the sound of the last word, repeated it and thus a wild alarm was quickly spread.

Meanwhile Jack North had found that he could not overtake his rival. He was not a fleet runner, while the other had gotten a start of him, which he could not hope to make up.

But he was too fertile in his resources to despair. In fact he was never known to give up a contest which he had once fairly entered. This persistence in whatever he undertook was the secret of Jack North's wonderful success amid environments which must have discouraged less courageous hearts.

Still it looked to his enemy, as the latter glanced back to see him leisurely turn into a side street leading away from their destination, that he had nothing further to fear from him.

"Thought you would be glad to give in," cried out the delighted seeker of the situation at the engine shops, and believing that he had nothing further to fear, the awkward youth slackened his gait to a walk.

Though Jack turned into the alley at a moderate pace, as soon as he had gone a short distance, he started again into a smart run.

"I shall have farther to go," he thought, "but Fret Offut will think I have given up, and thus he will let me get in ahead of him."

This seemed the truth, when, at last, Jack came in sight of the low-walled and scattering buildings belonging to John Fowler & Co., engine builders....