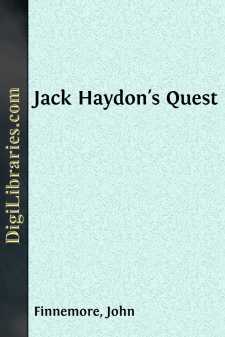 CHAPTER I. THE ATTACK ON THE HEATH.

Jack Haydon, prefect of Rushmere School and captain of the first fifteen, walked swiftly out of the school gates and turned along the high road. He had leave to go to the little town of Longhampton, three miles away, to visit a day-scholar, a great friend of his, now on the sick list.

He was alone, and he swung along at a cracking pace, for he could walk as well as he could run, and a finer three-quarter had never been known at Rushmere. He was a tall, powerful lad, nearly nineteen years of age, five foot ten and a half inches in his stockings, and turning the scale at twelve stone five. At the present moment he carried not an ounce of spare flesh, for he was in training for the great match, Rushmere v. Repton, and his weight was compact of solid bone, muscle, and sinew. As he stepped along the highway, moving with the easy grace of a well-built athlete, he looked the very picture of a handsome English lad, at one of the finest moments of his life, the point where youth and manhood meet.

The road he followed was called a high road, but the name clung to it from old use rather than because of present service. Eighty years before it had been a famous coaching road, along which the galloping teams had whirled the mails, but now it had fallen into decay, and was little used except by people passing from Rushmere to Longhampton. A mile from the school it ran across a lonely, unenclosed piece of heath, the side of the way being bordered by clumps of holly, thorn, and furze.

Halfway across this desolate stretch of country, Jack was surprised by seeing a man step from behind a thick holly bush and place himself directly in the lad's way. As Jack approached, the man held up his hand.

Jack stopped in sheer surprise, and looked at the speaker in wonder. What could the man want with him? At a glance he saw the man was not English, though upon closer examination he could not place the type. The stranger's skin was darker than an Englishman's, but not darker than many a Spaniard's. His eyes were large and black and liquid; their look was now crafty and a trifle menacing; his hair was lank and intensely black. In build he was very slight, with thin arms and legs. Jack's idea was that if he had been a little darker he might very well have been a Hindoo.

"And what, my friend, may you want with me?" said Jack genially.

"This morning you received a letter from your father," said the dusky stranger.

"How under the sun do you know that?" asked Jack; "and what if I did? I don't see where your interest comes in."

"I wish to see that letter. You had better hand it over at once."

"Don't you ever apply for a further stock of cheek, my little man," said Jack, "for you've got all you need, and a little bit over."

"The letter is almost certainly in your pocket," said the stranger in perfect English, yet pronounced with a curiously odd lisp and click, "and I must see it."

"It's in my pocket all right, confound your cheek," replied Jack, "and there it will stay. Come, get a move on you, and clear out of my way."

"I shall not get out of your way," said the other. "I shall stop you until I have read the letter."

"I don't know what lunatic asylum is short of your cheerful presence to-day," remarked Jack, "and if you don't clear out quick I shall certainly rush you. In which case, I beg you to observe that I am, even if I say it myself, a pretty stiff tackler, and about three stone heavier than you."

The man laughed mockingly and waved his hand, as if making very light of Jack's purpose.

"I assure you," he said in a soft voice, and giving once more his laugh of light mockery, "that it would be much better for you to hand over the letter at once. I do not wish to hurt you, but I have not the least objection to do so if it becomes necessary."

Jack's warm blood was fired at once, and he pulled himself together for a swift charge which would fill this stranger with surprised regret for what he had brought upon himself. But, for a second, something checked him; a strange, mysterious feeling came over him as he wondered what lay behind all this....