Jack and the Check Book 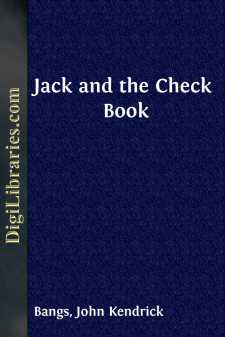 JACK AND THE CHECK-BOOK I

nce upon a time a great many years ago there lived a poor woman who, having invested all her savings in mining shares, was soon brought to penury and want. She had bought her modest little home and all there was in it on the instalment plan, and here she was, upon a certain beautiful morning in late spring, absolutely penniless, and three days off, staring her in the face, were payments due on the piano, the kitchen range and even on the house itself. Moreover, the winter had been a bitter one. Four times had the water-pipes frozen and burst, and a plumber's bill of appalling magnitude had come in the morning's mail, with the stern admonition stamped in red letters at the bottom:

LONG PAST DUE. PLEASE REMIT.

The unhappy woman was at her wit's ends to know what to do. She had tried to sell her shares in "Amalgamated War-whoop," only to find that that once promising company had passed into the hands of a receiver, and that there was an assessment, amounting to four times their face value, due on the shares, so that every possible purchaser to whom she applied refused to take the stock off her hands unless she paid them five dollars a share for the service and would guarantee them against the chance of further loss. All other means of raising the necessary funds—and she had tried them all—proved equally futile. The savings-banks would not lend her a penny on a house of which the parlor floor alone was clear of obligation, and the threat of the piano people to remove that instrument if the March instalment, now a month over-due, was not immediately forthcoming rendered that both unsalable and valueless as security for a loan.

She sat, the perfect picture of hopeless despair, in her rocking-chair, gazing moodily out of the window, thinking dreadful thoughts, and, it may be, contemplating the alternative of suicide or marriage with the village magnate, a miserable villain whom everybody detested, and who, everybody knew very well, had been instrumental in the ruin of her deceased husband, a once prosperous haberdasher. But on a sudden her look of despair faded wholly away and a great light of happiness illumined her eyes, as up the garden path, whistling merrily as he strode along, came her son Jack, a lad of fifteen, the comfort and solace of her lonely days.

"Dear boy!" she murmured softly to herself as he waved his hand at her, "he is the only thing I have left that there isn't something due on."

The boy, entering the room, still whistling, flung his cap up on the table and kissed his mother affectionately.

"Well, mother," he said, joyously, "our troubles are over at last."

Her face beamed an eager inquiry. The sudden, overwhelming happiness of the news itself deprived her of the power of speech for a moment, and then with difficulty she gasped out the words:

"Then you have secured a place with steady wages, my son?"

Her heart beat wildly as she awaited the answer.

"No, mother," he replied, promptly. "The only position open to me was that of private secretary to old Jonas Bilkins, my father's enemy, and when he found out that I was my father's son he fired me out of his office."

"No wonder!" muttered the woman. "He didn't dare let you have access to his private papers. He knows that every penny he calls his own belongs by right to us, and once you got hold of his letter-files and secret documents you could prove it."

"So he said, mother dear," said the boy. "He was brutally frank about it, and when I told him what I thought of him, and advised him to pick out a nice, comfortable jail to spend his declining years in, he threw his check-book at my head."