Italy at War and the Allies in the West 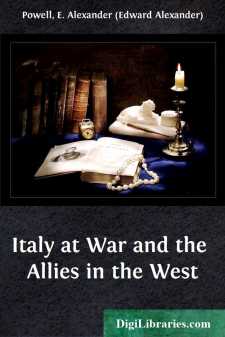 THE WAY TO THE WAR

When I told my friends that I was going to the Italian front they smiled disdainfully. "You will only be wasting your time," one of them warned me. "There isn't anything doing there," said another. And when I came back they greeted me with "You didn't see much, did you?" and "What are the Italians doing, anyway?"

If I had time I told them that Italy is holding a front which is longer than the French and British and Belgian fronts combined (trace it out on the map and you will find that it measures more than four hundred and fifty miles); that, alone among the Allies, she is doing most of her fighting on the enemy's soil; that she is fighting an army which was fourth in Europe in numbers, third in quality, and probably second in equipment; that in a single battle she lost more men than fell on both sides at Gettysburg; that she has taken 100,000 prisoners; that, to oppose the Austrian offensive in the Trentino, she mobilized a new army of half a million men, completely equipped it, and moved it to the front, all in seven days; that, were her trench lines carefully ironed out, they would extend as far as from New York to Salt Lake City; that, instead of digging these trenches, she has had to blast most of them from the solid rock; that she has mounted 8-inch guns on ice-ledges nearly two miles above sea-level, in positions to which a skilled mountaineer would find it perilous to climb; that in places the infantry has advanced by driving iron pegs and rings into the perpendicular walls of rock and swarming up the dizzy ladders thus constructed; that many of the positions can be reached only in baskets slung from sagging wires stretched across mile-deep chasms; that many of her soldiers are living like arctic explorers, in caverns of ice and snow; that on the sun-scorched floor of the Carso the bodies of the dead have frequently been found baked hard and mummified, while in the mountains they have been found stiff, too, but stiff from cold; that in the lowlands of the Isonzo the soldiers have fought in water to their waists, while the water for the armies fighting in the Trentino has had to be brought up from thousands of feet below; and, most important of all, that she has kept engaged some forty Austrian divisions (about 750,000 men)—a force sufficient to have turned the scale in favor of the Central Powers on any of the other fronts. And I have usually added: "After what I have seen over there, I feel like lifting my hat, in respect and admiration, to the next Italian that I see."

"Many of the Italian positions can be reached only in baskets slung from sagging wires stretched across mile-deep chasms."

An Italian Position in the Carnia.

"Many of the Italian soldiers are living like arctic explorers, in caverns of ice and snow."

It is no exaggeration to say that not one American in a thousand has any adequate conception of what Italy is fighting for, nor any appreciation of the splendid part she is playing in the war....