It, and Other Stories 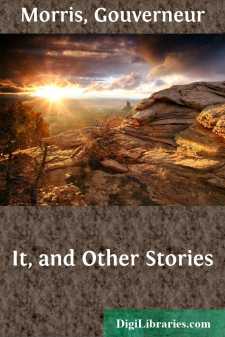 Prana Beach would be a part of the solid west coast if it wasn't for a half circle of the deadliest, double-damned, orchid-haunted black morass, with a solid wall of insects that bite, rising out of it. But the beach is good dry sand, and the wind keeps the bugs back in the swamp. Between the beach and the swamp is a strip of loam and jungle, where some niggers live and a god.

I landed on Prana Beach because I'd heard—but it wasn't so and it doesn't matter. Anyhow, I landed—all alone; the canoemen wouldn't come near enough for me to land dry, at that. Said the canoe would shrivel up, like a piece of hide in a fire, if it touched that beach; said they'd turn white and be blown away like puffs of smoke. They nearly backed away with my stuff; would have if I hadn't pulled a gun on them. But they made me wade out and get it myself—thirty foot of rope with knots, dynamite, fuses, primers, compass, grub for a week, and—well, a bit of skin in a half-pint flask with a rubber and screw-down top. Not nice, it wasn't, wading out and back and out and back. There was one shark, I remember, came in so close that he grounded, snout out, and made a noise like a pig. Sun was going down, looking like a bloody murder victim, and there wasn't going to be any twilight. It's an uncertain light that makes wading nasty. It might be salt-water soaking into my jeans, but with that beastly red light over it, it looked like blood.

The canoe backed out to the—you can't call 'em a nautical name. They've one big, square sail of crazy-quilt work—raw silk, pieces of rubber boots, rattan matting, and grass cloth, all colors, all shapes of patches. They point into the wind and then go sideways; and they don't steer with an oar that Charon discarded thousands of years ago, that's painted crimson and raw violet; and the only thing they'd be good for would be fancy wood-carpets. Mine, or better, ours, was made of satinwood, and was ballasted with scrap-iron, rotten ivory, and ebony. There, I've told you what she was like (except for the live entomological collection aboard), and you may call her what you please. The main point is that she took the canoe aboard, and then disobeyed orders. Orders were to lie at anchor (which was a dainty thing of stone, all carved) till further orders. But she'd gotten rid of me, and she proposed to lie farther off, and come back (maybe) when I'd finished my job. So she pointed straight in for where I was standing amid my duds and chattels, just as if she was going to thump herself ashore—and then she began to slip off sideways like a misbegotten crab, and backward, too—until what with the darkness tumbling down, and a point o' palms, I lost sight of her. Why didn't I shout, and threaten, and jump up and down?

Because I was alone on Prana Beach, between the sea and the swamp. And because the god was beginning to get stirred up; and because now that I'd gone through six weeks' fever and boils to get where I was, I wished I hadn't gotten there. No, I wasn't scared. You wouldn't be if you were alone on a beach, after sundown, deserted you may say, your legs shaky with being wet, and your heart hot and mad as fire because you couldn't digest the things you had to put into your stomach, and if you'd heard that the beach was the most malodorous, ghoul-haunted beach of the seas, and if just as you were saying to yourself that you for one didn't believe a word of it—if, I say, just then It began to cut loose—back of you—way off to the left—way off to the right—why you'd have been scared.

It wasn't the noise it made so much as the fact that it could make any noise at all.... Shut your mouth tight and hum on the letter m-mmmmmmm—that's it exactly. Only It's was ten times as loud, and vibrating. The vibrations shook me where I stood.

With the wind right, that humming must have carried a mile out to sea; and that's how it had gotten about that there was a god loose on Prana Beach. It was an It-god, the niggers all agreed. You'll have seen 'em carved on paddles—shanks of a man, bust of a woman, nose of a snapping-turtle, and mouth round like the letter O....