Isle of the Undead 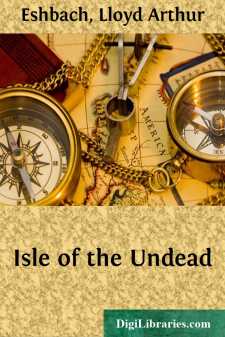 1. A Horror from the Past

drab gray sheet of cloud slipped stealthily from the moon's round face, like a shroud slipping from the face of one long dead, a coldly phosphorescent face from which the eyes had been plucked. Yellow radiance fell toward a calm, oily sea, seeking a narrow bank of fog lying low on the water, penetrating its somber mass like frozen yellow fingers.

"Ghastly?" Darrell leaned against the rail, laughing softly. "One cocktail too many—that's the answer. It's given you the jitters. Listen!" Faintly from the salon came strains of dance music and the rhythmic shuffle of feet. "A nifty yacht, a South Sea moon, a radio dance orchestra, dancers—and little Clifford! And you call it ghastly!" Almost savagely his arms tightened about her, and the bantering note left his voice. "I'm crazy about you, Vilma."

She tried to laugh, but it was an unconvincing sound. "It's the moon, Cliff—I guess. I never saw it like that before. Something's going to happen—something dreadful. I just know it!"

"Oh—be sensible, Vilma!" There was a hint of impatience in Cliff's deep voice. A gorgeous girl in his arms—dark-haired, dark-eyed, made for love—and she talked of dreadful things which were going to happen because the moon looked screwy.

She released herself and glanced out over the sea. "I know I'm silly, but——" Her voice froze and her slender body stiffened. "Cliff—look!"

Darrell spun around, and as he stared, he felt a dryness seeping into his throat, choking him....

Out of the winding-sheet of fog into the moonlight crept a strange, strange craft, her crumbling timbers blackened and rotted with incredible age. The corpse of a ship, she seemed, resurrected from the grave of the sea. Her prow thrust upward like a scimitar bent backward, hovering over the gaunt ruin of a cabin whose seaward sides were formed by port and starboard bows. From a shallow pit amidships jutted the broken arm of a mast, its splintered tip pointing toward the blindly watching moon. The stern, thickly covered with the moldering encrustations of age, curved inward above the strange high poop, beneath which lay another cabin. And along either side of her worm-eaten freeboard ran a row of apertures like oblong portholes. Out of these projected great oars, long, unwieldy, as somberly black as the rest of the ancient hulk.

Now a sound drifted across the waters, the steady, rhythmic br-rr-oom, br-rr-oom, br-rr-oom of a drum beating time for the rowers. Its hollow thud checked the heart, set it to throbbing in tempo with its own weary pulse. Ghostly fingers, dripping dread, crawled up Darrell's spine.

Stiff-lipped, Vilma gasped: "What—what is it?"

Cliff answered in a dry husky voice, the words seeming to trip over an awkward tongue. "It's—it's—it can't be, damn it!—but it's a galley, a ship from the days of Alexander the Great! What's it doing—here—now?"

Closer she came through the moon-path, a frothing lip of brine curling away from her swelling prow....