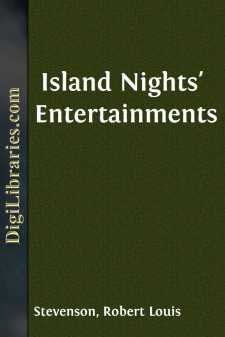 CHAPTER I.  A SOUTH SEA BRIDAL.

I saw that island first when it was neither night nor morning.  The moon was to the west, setting, but still broad and bright.  To the east, and right amidships of the dawn, which was all pink, the daystar sparkled like a diamond.  The land breeze blew in our faces, and smelt strong of wild lime and vanilla: other things besides, but these were the most plain; and the chill of it set me sneezing.  I should say I had been for years on a low island near the line, living for the most part solitary among natives.  Here was a fresh experience: even the tongue would be quite strange to me; and the look of these woods and mountains, and the rare smell of them, renewed my blood.

The captain blew out the binnacle lamp.

“There!” said he, “there goes a bit of smoke, Mr. Wiltshire, behind the break of the reef.  That’s Falesá, where your station is, the last village to the east; nobody lives to windward—I don’t know why.  Take my glass, and you can make the houses out.”

I took the glass; and the shores leaped nearer, and I saw the tangle of the woods and the breach of the surf, and the brown roofs and the black insides of houses peeped among the trees.

“Do you catch a bit of white there to the east’ard?” the captain continued.  “That’s your house.  Coral built, stands high, verandah you could walk on three abreast; best station in the South Pacific.  When old Adams saw it, he took and shook me by the hand.  ‘I’ve dropped into a soft thing here,’ says he.—‘So you have,’ says I, ‘and time too!’  Poor Johnny!  I never saw him again but the once, and then he had changed his tune—couldn’t get on with the natives, or the whites, or something; and the next time we came round there he was dead and buried.  I took and put up a bit of a stick to him: ‘John Adams, obit eighteen and sixty-eight.  Go thou and do likewise.’  I missed that man.  I never could see much harm in Johnny.”

“Some kind of sickness,” says the captain.  “It appears it took him sudden.  Seems he got up in the night, and filled up on Pain-Killer and Kennedy’s Discovery.  No go: he was booked beyond Kennedy.  Then he had tried to open a case of gin.  No go again: not strong enough.  Then he must have turned to and run out on the verandah, and capsized over the rail.  When they found him, the next day, he was clean crazy—carried on all the time about somebody watering his copra.  Poor John!”

“Was it thought to be the island?” I asked.

“Well, it was thought to be the island, or the trouble, or something,” he replied.  “I never could hear but what it was a healthy place.  Our last man, Vigours, never turned a hair.  He left because of the beach—said he was afraid of Black Jack and Case and Whistling Jimmie, who was still alive at the time, but got drowned soon afterward when drunk.  As for old Captain Randall, he’s been here any time since eighteen-forty, forty-five.  I never could see much harm in Billy, nor much change.  Seems as if he might live to be Old Kafoozleum.  No, I guess it’s healthy.”

“There’s a boat coming now,” said I.  “She’s right in the pass; looks to be a sixteen-foot whale; two white men in the stern sheets.”

“That’s the boat that drowned Whistling Jimmie!” cried the Captain; “let’s see the glass.  Yes, that’s Case, sure enough, and the darkie.  They’ve got a gallows bad reputation, but you know what a place the beach is for talking.  My belief, that Whistling Jimmie was the worst of the trouble; and he’s gone to glory, you see.  What’ll you bet they ain’t after gin?  Lay you five to two they take six cases.”

When these two traders came aboard I was pleased with the looks of them at once, or, rather, with the looks of both, and the speech of one.  I was sick for white neighbours after my four years at the line, which I always counted years of prison; getting tabooed, and going down to the Speak House to see and get it taken off; buying gin and going on a break, and then repenting; sitting in the house at night with the lamp for company; or walking on the beach and wondering what kind of a fool to call myself for being where I was.  There were no other whites upon my island, and when I sailed to the next, rough customers made the most of the society.  Now to see these two when they came aboard was a pleasure.  One was a negro, to be sure; but they were both rigged out smart in striped pyjamas and straw hats, and Case would have passed muster in a city.  He was yellow and smallish, had a hawk’s nose to his face, pale eyes, and his beard trimmed with scissors.  No man knew his country, beyond he was of English speech; and it was clear he came of a good family and was splendidly educated.  He was accomplished too; played the accordion first-rate; and give him a piece of string or a cork or a pack of cards, and he could show you tricks equal to any professional.  He could speak, when he chose, fit for a drawing-room; and when he chose he could blaspheme worse than a Yankee boatswain, and talk smart to sicken a Kanaka.  The way he thought would pay best at the moment, that was Case’s way, and it always seemed to come natural, and like as if he was born to it.  He had the courage of a lion and the cunning of a rat; and if he’s not in hell to-day, there’s no such place.  I know but one good point to the man: that he was fond of his wife, and kind to her.  She was a Samoa woman, and dyed her hair red, Samoa style; and when he came to die (as I have to tell of) they found one strange thing—that he had made a will, like a Christian, and the widow got the lot: all his, they said, and all Black Jack’s, and the most of Billy Randall’s in the bargain, for it was Case that kept the books.  So she went off home in the schooner Manu’a, and does the lady to this day in her own place....