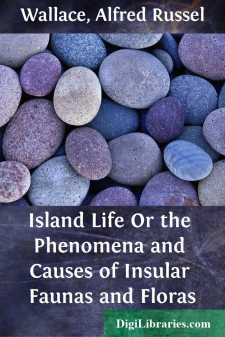 Remarkable Contrasts in distribution of Animals—Britain and Japan—Australia and New Zealand—Bali and Lombok—Florida and Bahama Islands—Brazil and Africa—Borneo, Madagascar, and Celebes—Problems in distribution to be found in every country—Can be solved only by the combination of many distinct lines of inquiry, biological and physical—Islands offer the best subjects for the study of distribution—Outline of the subjects to be discussed in the present volume.

When an Englishman travels by the nearest sea-route from Great Britain to Northern Japan he passes by countries very unlike his own, both in aspect and natural productions. The sunny isles of the Mediterranean, the sands and date-palms of Egypt, the arid rocks of Aden, the cocoa groves of Ceylon, the tiger-haunted jungles of Malacca and Singapore, the fertile plains and volcanic peaks of Luzon, the forest-clad mountains of Formosa, and the bare hills of China, pass successively in review; till after a circuitous voyage of thirteen thousand miles he finds himself at Hakodadi in Japan. He is now separated from his starting-point by the whole width of Europe and Northern Asia, by an almost endless succession of plains and mountains, arid deserts or icy plateaux, yet when he visits the interior of the country he sees so many familiar natural objects that he can hardly help fancying he is close to his home. He finds the woods and fields tenanted by tits, hedge-sparrows, wrens, wagtails, larks, redbreasts, thrushes, buntings, and house-sparrows, some absolutely identical with our own feathered friends, others so closely resembling them that it requires a practised ornithologist to tell the difference. If he is fond of insects he notices many butterflies and a host of beetles which, though on close examination they are found to be distinct from ours, are yet of the same general aspect, and seem just what might be expected in any part of Europe. There are also of course many birds and insects which are quite new and peculiar, but these are by no means so numerous or conspicuous as to remove the general impression of a wonderful resemblance between the productions of such remote islands as Britain and Yesso.

Now let an inhabitant of Australia sail to New Zealand, a distance of less than thirteen hundred miles, and he will find himself in a country whose productions are totally unlike those of his own. Kangaroos and wombats there are none, the birds are almost all entirely new, insects are very scarce and quite unlike the handsome or strange Australian forms, while even the vegetation is all changed, and no gum-tree, or wattle, or grass-tree meets the traveller's eye.

But there are some more striking cases even than this, of the diversity of the productions of countries not far apart. In the Malay Archipelago there are two islands, named Bali and Lombok, each about as large as Corsica, and separated by a strait only fifteen miles wide at its narrowest part. Yet these islands differ far more from each other in their birds and quadrupeds than do England and Japan....