Is Shakespeare Dead? From my autobiography. 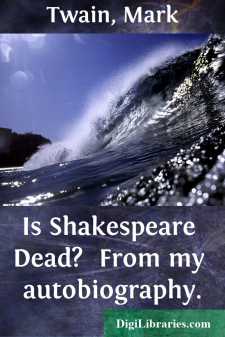 Scattered here and there through the stacks of unpublished manuscript which constitute this formidable Autobiography and Diary of mine, certain chapters will in some distant future be found which deal with “Claimants”—claimants historically notorious: Satan, Claimant; the Golden Calf, Claimant; the Veiled Prophet of Khorassan, Claimant; Louis XVII., Claimant; William Shakespeare, Claimant; Arthur Orton, Claimant; Mary Baker G. Eddy, Claimant—and the rest of them.  Eminent Claimants, successful Claimants, defeated Claimants, royal Claimants, pleb Claimants, showy Claimants, shabby Claimants, revered Claimants, despised Claimants, twinkle starlike here and there and yonder through the mists of history and legend and tradition—and oh, all the darling tribe are clothed in mystery and romance, and we read about them with deep interest and discuss them with loving sympathy or with rancorous resentment, according to which side we hitch ourselves to.  It has always been so with the human race.  There was never a Claimant that couldn’t get a hearing, nor one that couldn’t accumulate a rapturous following, no matter how flimsy and apparently unauthentic his claim might be.  Arthur Orton’s claim that he was the lost Tichborne baronet come to life again was as flimsy as Mrs. Eddy’s that she wrote Science and Health from the direct dictation of the Deity; yet in England near forty years ago Orton had a huge army of devotees and incorrigible adherents, many of whom remained stubbornly unconvinced after their fat god had been proven an impostor and jailed as a perjurer, and to-day Mrs. Eddy’s following is not only immense, but is daily augmenting in numbers and enthusiasm.  Orton had many fine and educated minds among his adherents, Mrs. Eddy has had the like among hers from the beginning.  Her church is as well equipped in those particulars as is any other church.  Claimants can always count upon a following, it doesn’t matter who they are, nor what they claim, nor whether they come with documents or without.  It was always so.  Down out of the long-vanished past, across the abyss of the ages, if you listen you can still hear the believing multitudes shouting for Perkin Warbeck and Lambert Simnel.

A friend has sent me a new book, from England—The Shakespeare Problem Restated—well restated and closely reasoned; and my fifty years’ interest in that matter—asleep for the last three years—is excited once more.  It is an interest which was born of Delia Bacon’s book—away back in that ancient day—1857, or maybe 1856.  About a year later my pilot-master, Bixby, transferred me from his own steamboat to the Pennsylvania, and placed me under the orders and instructions of George Ealer—dead now, these many, many years.  I steered for him a good many months—as was the humble duty of the pilot-apprentice: stood a daylight watch and spun the wheel under the severe superintendence and correction of the master.  He was a prime chess player and an idolater of Shakespeare.  He would play chess with anybody; even with me, and it cost his official dignity something to do that.  Also—quite uninvited—he would read Shakespeare to me; not just casually, but by the hour, when it was his watch, and I was steering.  He read well, but not profitably for me, because he constantly injected commands into the text.  That broke it all up, mixed it all up, tangled it all up—to that degree, in fact, that if we were in a risky and difficult piece of river an ignorant person couldn’t have told, sometimes, which observations were Shakespeare’s and which were Ealer’s.  For instance: