Iron Making in the Olden Times as instanced in the Ancient Mines, Forges, and Furnaces of The Forest of Dean 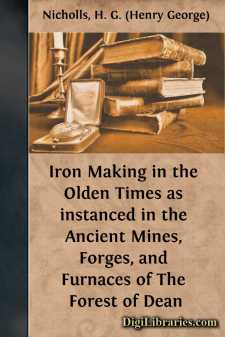 If there be one circumstance more than another that has conferred celebrity on the Forest of Dean, it is the remote origin, perpetuation, and invariably high repute of its iron works.  Uniting these characteristics in one, it probably surpasses every other spot in Great Britain.

In the author’s former “historical account” of this neighbourhood, he gave all the information he had then collected relative to the mining and making of iron therein.  Since that time, he has greatly extended his investigations, especially amongst the records of the Court of Exchequer.  The result is, that he believes he is now enabled to present to the public the most complete description that has yet appeared of the manufacture of iron during the Middle Ages, detailing, in the first place, all the particulars he has gathered of the operations of the primitive miner, or iron worker, and proceeding, in chronological order, to the present time.

In the year 1780, wrote Mr. Wyrrall, in his valuable MS. on the ancient iron works of the Forest:—

“There are, deep in the earth, vast caverns scooped out by men’s hands, and large as the aisles of churches; and on its surface are extensive labyrinths worked among the rocks, and now long since overgrown with woods, which whosoever traces them must see with astonishment, and incline to think them to have been the work of armies rather than of private labourers.  They certainly were the toil of many centuries, and this perhaps before they thought of searching in the bowels of the earth for their ore—whither, however, they at length naturally pursued the veins, as they found them to be exhausted near the surface.”

Such were the remains, as they existed in his day, of the original iron mines of this locality; and, except where modern operations have obliterated them, such they continue to the present time.

The fact of their presenting no trace of engineering skill, or of the use of any kind of machinery, is conclusive of their remote antiquity.  Nor are there any traces of gunpowder having been employed in them; but this, Mr. John Taylor says, was not resorted to for such purposes earlier than 1620, when some German miners, brought over by Prince Rupert, used it at Ecton, in Staffordshire.

It is the unanimous opinion of the neighbourhood that these caves owe their origin to the predecessors of that peculiar order of operatives known as “the free miners of the Forest of Dean;” a view which the authentic history of the district confirms.

They have the appearance either of spacious caves, as above Lydney and on the Doward Hill, or of deep stone quarries, as at the Scowles, near Bream.  Or they consist of precipitous and irregularly shaped passages, left by the removal of the ore or mineral earth wherever it was found, and which was followed down, in some instances, for many hundreds of yards.

Openings were made to the surface according as the course of the mine-ore permitted, being softer to work than the limestone rock that contained it, thus securing efficient ventilation.  Hence, although they have been so long deserted, the air in them is perfectly good.  They are also quite dry—owing, probably, to their being drained by the new workings adjacent to them, and descending to a far greater depth.

In the first place, they were excavated as far down, no doubt, as the water permitted; that is, to a vertical depth of about 100 yards, or, in dry seasons, even lower, as may be seen by the watermarks left in some of them.  Of these deeper workings, one of the most extensive occurs on the Lining Wood Hill, above Mitcheldean, and is well worth exploring.  They are met with, however, on most sides of the Forest—in fact, wherever the ore crops out, giving the name of “meand,” or mine, to such places....