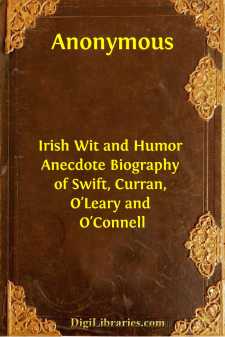 Dr. Jonathan Swift, Dean of St. Patrick's, was born a.d. 1667, in Hoey's Court, Dublin, the fourth house, right hand side, as you enter from Werburgh-street. The houses in this court still bear evidence of having been erected for the residence of respectable folks. The "Dean's House," as it is usually designated, had marble chimney-pieces, was wainscotted from hall to garret, and had panelled oak doors, one of which is in possession of Doctor Willis, Rathmines—a gentleman who takes a deep interest in all matters connected with the history of his native city.

When Swift was a year old, an event happened to him that seems very unusual; for his nurse, who was a woman of Whitehaven, being under the absolute necessity of seeing one of her relations, who was then extremely sick, and from whom she expected a legacy; and being extremely fond of the infant, she stole him on shipboard unknown to his mother and uncle, and carried him with her to Whitehaven, where he continued for almost three years. For, when the matter was discovered, his mother sent orders by all means not to hazard a second voyage till he could be better able to bear it. The nurse was so careful of him that before he returned he had learned to spell; and by the time that he was five years old, he could read any chapter in the Bible.

After his return to Ireland he was sent at six years old to the school of Kilkenny, from whence at fourteen he was admitted into the Dublin University.

A CERTIFICATE OF MARRIAGE.

Swift, in one of his pedestrian journeys from London towards Chester, is reported to have taken shelter from a summer tempest under a large oak on the road side, at no great distance from Litchfield. Presently, a man, with a pregnant woman, wore driven by the like impulse to avail themselves of the same covert. The Dean, entering into conversation, found the parties were destined for Litchfield to be married. As the situation of the woman indicated no time should be lost, a proposition was made on his part to save them the rest of the journey, by performing the ceremony on the spot. The offer was gladly accepted, and thanks being duly returned, the bridal pair, as the sky brightened, was about to return: but the bridegroom suddenly recollecting that a certificate was requisite to authenticate the marriage, requested one, which the Dean wrote in these words:

Under an oak, in stormy weather,I joined this rogue and wench together,And none but he who rules the thunder,Can put this wench and rogue asunder. GRACE AFTER DINNER.

Swift was once invited by a rich miser with a large party to dine; being requested by the host to return thanks at the removal of the cloth, uttered the following grace:—

Thanks for this miracle!—this is no lessThan to eat manna in the wilderness.Where raging hunger reign'd we've found relief, And seen that wondrous thing, a piece of beef.Here chimneys smoke, that never smok'd before,And we've all ate, where we shall eat no more...!
Show more
Show less