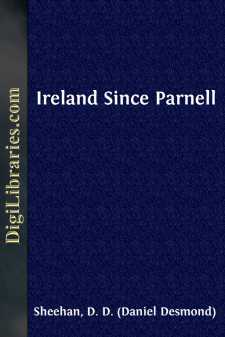 CHAPTER I A LEADER APPEARS

There are some who would dispute the greatness of Parnell—who would deny him the stature and the dignity of a leader of men. There are others who would aver that Parnell was made by his lieutenants—that he owed all his success in the political arena to their ability and fighting qualities and that he was essentially a man of mediocre talents himself.

It might be enough to answer to these critics that Parnell could never hold the place he does in history, that he could never have overawed the House of Commons as he did, nor could he have emerged so triumphantly from the ordeal of The Times Commission were he not superabundantly endowed with all the elements and qualities of greatness. But apart from this no dispassionate student of the Parnell period can deny that it was fruitful in massive achievement for Ireland. When Parnell appeared on the scene it might well be said of the country, what had been truly said of it in another generation, that it was "as a corpse on the dissecting-table." It was he, and the gallant band which his indomitable purpose gathered round him, that galvanised the corpse into life and breathed into it a dauntless spirit of resolve which carried it to the very threshold of its sublimest aspirations. To Isaac Butt is ascribed the merit of having conceived and given form to the constitutional movement for Irish liberty. He is also credited with having invented the title "Home Rule"—a title which, whilst it was a magnificent rallying cry for a cause, in the circumstances of the time when it was first used, was probably as mischievous in its ultimate results as any unfortunate nomenclature well could be, since all parties in Ireland and out of it became tied to its use when any other designation for the Irish demand might have made it more palatable with the British masses. Winston Churchill is reported to have said, in his Radical days, to a prominent Irish leader: "I cannot understand why you Irishmen are so stupidly wedded to the name 'Home Rule.' If only you would call it anything else in the world, you would have no difficulty in getting the English to agree to it."

But although Isaac Butt was a fine intellect and an earnest patriot he never succeeded in rousing Ireland to any great pitch of enthusiasm for his policy. It was still sick, and weary, and despondent after the Fenian failure, and the revolutionary leaders were not prone to tolerate or countenance what they regarded as a Parliamentary imposture. A considerable body of the Irish landed class supported the Butt movement, because they had nothing to fear for their own interests from it. They were members of his Parliamentary Party, not to help him on his way, but rather with the object of weakening and retarding his efforts.

It was at this stage that Parnell arrived. The country was stricken with famine—the hand of the lord, in the shape of the landlord, was heavy upon it. After a season of unexampled agricultural prosperity the lean years had come to the Irish farmer and he was ripe for agitation and resistance....