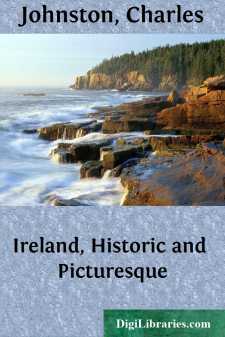 I. VISIBLE AND INVISIBLE.

Here is an image by which you may call up and remember the natural form and appearance of Ireland:

Think of the sea gradually rising around her coasts, until the waters, deepened everywhere by a hundred fathoms, close in upon the land. Of all Ireland there will now remain visible above the waves only two great armies of islands, facing each other obliquely across a channel of open sea. These two armies of islands will lie in ordered ranks, their lines stretching from northeast to southwest; they will be equal in size, each two hundred miles along the front, and seventy miles from front to rear. And the open sea between, which divides the two armies, will measure seventy miles across.

Not an island of these two armies, as they lie thus obliquely facing each other, will rise as high as three thousand feet; only the captains among them will exceed a thousand; nor will there be great variety in their forms. All the islands, whether north or south, will have gently rounded backs, clothed in pastures nearly to the crest, with garments of purple heather lying under the sky upon their ridges. Yet for all this roundness of outline there will be, towards the Atlantic end of either army, a growing sternness of aspect, a more sombre ruggedness in the outline of the hills, with cliffs and steep ravines setting their brows frowning against the deep.

Hold in mind the image of these two obliquely ranged archipelagoes, their length thrice their breadth, seaming the blue of the sea, and garmented in dark green and purple under the sunshine; and, thinking of them thus, picture to yourself a new rising of the land, a new withdrawal of the waters, the waves falling and ever falling, till all the hills come forth again, and the salt tides roll and ripple away from the valleys, leaving their faces for the winds to dry; let this go on till the land once more takes its familiar form, and you will easily call up the visible image of the whole.

As you stand in the midst of the land, where first lay the channel of open sea, you will have, on your northern horizon, the beginning of a world of purple-outlined hills, outliers of the northern mountain region, which covers the upper third of the island. On all sides about you, from the eastern sea to the western ocean, you will have the great central plain, dappled with lakes and ribbed with silver rivers, another third of the island. Then once more, to the south, you will have a region of hills, the last third of Ireland, in size just equal to the northern mountains or the central plain.

The lines of the northern hills begin with the basalt buttresses of Antrim and the granite ribs of Down, and pass through northern Ulster and Connacht to the headlands of Mayo and Galway. Their rear is held by the Donegal ranges, keeping guard against the blackness of the northern seas.

The plain opens from the verge of these hills; the waters that gather on its pleasant pastures and fat fields, or among the green moss tracts of its lowlands, flow eastward by the Boyne or southwestward by the Shannon to the sea.

Then with the granite mountains of Dublin and Wicklow begin the southern hills, stretching through south Leinster and Munster to the red sandstone ridges of Cork and Kerry, our last vantage-ground against the Atlantic.

Finally, encircling all, is the perpetual presence of the sea, with its foaming, thunderous life or its days of dreamy peace; around the silver sands or furrowed cliffs that gird the island our white waves rush forever, murmuring the music of eternity.

Such is this land of Eiré, very old, yet full of perpetual youth; a thousand times darkened by sorrow, yet with a heart of living gladness; too often visited by evil and pale death, yet welling ever up in unconquerable life,--the youth and life and gladness that thrill through earth and air and sky, when the whole world grows beautiful in the front of Spring....