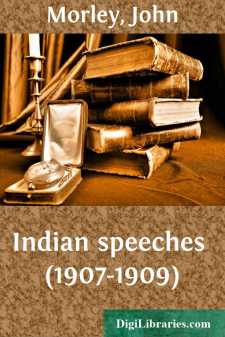 I am afraid I shall have to ask the House for rather a large draft upon its indulgence. The Indian Secretary is like the aloe, that blooms once in 100 years: he only troubles the House with speeches of his own once in twelve months. There are several topics which the House will expect me to say something about, and of these are two or three topics of supreme interest and importance, for which I plead for patience and comprehensive consideration. We are too apt to find that Gentlemen both here and outside fix upon some incident of which they read in the newspaper; they put it under a microscope; they indulge in reflections upon it; and they regard that as taking an intelligent interest in the affairs of India. If we could suppose that on some occasion within the last three or four weeks a wrong turn had been taken in judgment at Simla, or in the Cabinet, or in the India Office, or that to-day in this House some wrong turn might be taken, what disasters would follow, what titanic efforts to repair these disasters, what devouring waste of national and Indian treasure, and what a wreckage might follow! These are possible consequences that misjudgment either here or in India might bring with it.

Sir, I believe I am not going too far when I say that this is almost, if not quite, the first occasion upon which what is called the British democracy in its full strength has been brought directly face to face with the difficulties of Indian Government in all their intricacies, all their complexities, all their subtleties, and above all in their enormous magnitude. Last year when I had the honour of addressing the House on the Indian Budget, I observed, as many have done before me, that it is one of the most difficult experiments ever tried in human history, whether you can carry on, what you will have to try to carry on in India—personal government along with free speech and free right of public meeting. This which last year was partially a speculative question, has this year become more or less actual, and that is a question which I shall by and by have to submit to the House. I want to set out the case as frankly as I possibly can. I want, if I may say so without presumption, to take the House into full confidence so far—and let nobody quarrel with this provision—as public interests allow. I will beg the House to remember that we do not only hear one another; we are ourselves this afternoon overheard. Words that may be spoken here, are overheard in the whole kingdom. They are overheard thousands of miles away by a vast and complex community. They are overheard by others who are doing the service and work of the Crown in India. By those, too, who take part in the immense work of commercial and non-official life in India. We are overheard by great Indian princes who are outside British India. We are overheard by the dim masses of Indians whom, in spite of all, we shall persist in regarding as our friends....