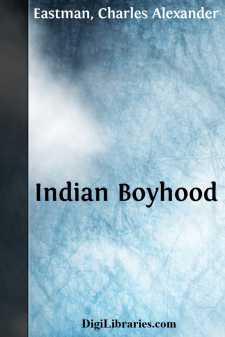 I. Hadakah, "The Pitiful Last"

WHAT boy would not be an Indian for a while when he thinks of the freest life in the world? This life was mine. Every day there was a real hunt. There was real game. Occasionally there was a medicine dance away off in the woods where no one could disturb us, in which the boys impersonated their elders, Brave Bull, Standing Elk, High Hawk, Medicine Bear, and the rest. They painted and imitated their fathers and grandfathers to the minutest detail, and accurately too, because they had seen the real thing all their lives.

We were not only good mimics but we were close students of nature. We studied the habits of animals just as you study your books. We watched the men of our people and represented them in our play; then learned to emulate them in our lives.

No people have a better use of their five senses than the children of the wilderness. We could smell as well as hear and see. We could feel and taste as well as we could see and hear. Nowhere has the memory been more fully developed than in the wild life, and I can still see wherein I owe much to my early training.

Of course I myself do not remember when I first saw the day, but my brothers have often recalled the event with much mirth; for it was a custom of the Sioux that when a boy was born his brother must plunge into the water, or roll in the snow naked if it was winter time; and if he was not big enough to do either of these himself, water was thrown on him. If the new-born had a sister, she must be immersed. The idea was that a warrior had come to camp, and the other children must display some act of hardihood.

I was so unfortunate as to be the youngest of five children who, soon after I was born, were left motherless. I had to bear the humiliating name "Hakadah," meaning "the pitiful last," until I should earn a more dignified and appropriate name. I was regarded as little more than a plaything by the rest of the children.

My mother, who was known as the handsomest woman of all the Spirit Lake and Leaf Dweller Sioux, was dangerously ill, and one of the medicine men who attended her said: "Another medicine man has come into existence, but the mother must die. Therefore let him bear the name 'Mysterious Medicine.'" But one of the bystanders hastily interfered, saying that an uncle of the child already bore that name, so, for the time, I was only "Hakadah."

My beautiful mother, sometimes called the "Demi-Goddess" of the Sioux, who tradition says had every feature of a Caucasian descent with the exception of her luxuriant black hair and deep black eyes, held me tightly to her bosom upon her death-bed, while she whispered a few words to her mother-in-law. She said: "I give you this boy for your own. I cannot trust my own mother with him; she will neglect him and he will surely die."

The woman to whom these words were spoken was below the average in stature, remarkably active for her age (she was then fully sixty), and possessed of as much goodness as intelligence. My mother's judgment concerning her own mother was well founded, for soon after her death that old lady appeared, and declared that Hakadah was too young to live without a mother....