India, Its Life and Thought 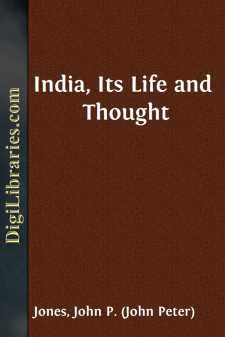 India has been called the land of quiet repose, content to remain anchored to the hoary past, and proud of her immobility. Invasion after invasion has swept over her; but—

Yet this same India is now throbbing with discontent, and is breathing, in all departments of her life, a deep spirit of unrest. This spirit has recently become acute and seemed, for a while, in danger of bursting into open rebellion, not unlike the Mutiny of half a century ago.

This movement is but a part of the new awakening of the East. The world has seen its marvellously rapid development and fruitage in Japan. It is witnessing the same process in China and Korea. The people of India, likewise, have been touched by its power and are no longer willing to rest contentedly as a subject people or a stagnant race.

This movement is not only political, it permeates every department of life; and it partakes of the general unrest which has taken possession of all the civilized nations of the earth. It is really the dawning of India's consciousness of strength and of a purpose to take her place, and to play a worthy part, in the great world drama.

This spirit found its incarnation and warmest expression in the opposition to the government scheme, two years ago, under Lord Curzon, for the partition of Bengal. The Bengalees keenly resented the division of their Province; for it robbed the clever Babu of many of the plums of office. He petitioned, and fomented agitation and opposition to the scheme. Then, in his spite against the government, he organized a boycott against all forms of foreign industry and commerce. This has been conducted with mad disregard to the people's own economic interest, and has, moreover, developed into bitter racial animosity.

The Bengalee has striven hard to carry into other Provinces also his spirit of antagonism to the State. Though he has not succeeded in convincing many others of the wisdom of his method, he has spread the spirit of discontent and of dissatisfaction far beyond his own boundary. Even sections of the land which denounce the boycott as folly, if not suicide, have taken up the political slogan of the Babu (Bande Mataram—Hail, Mother!) and are demanding, mostly in inarticulate speech, such rights and privileges as they imagine themselves to be deprived of.

The movement is, in some respects, a reactionary one; and race hatred is one of its most manifest results. It is not merely a rising of the East against the West; it is also a conflict between Mohammedans and Hindus. In Eastern Bengal, where the Mussulmans are in a large majority, and where the Hindus have become the most embittered, the former have stood aloof from the latter and have opposed the boycott. This has led to increasing hatred between the members of these two faiths,—a feeling which has spread all over the country, and which has carried them into opposing camps....