Incognita; or, Love and Duty Reconcil'd 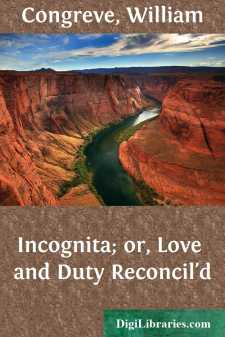 Some Authors are so fond of a Preface, that they will write one tho’ there be nothing more in it than an Apology for its self.  But to show thee that I am not one of those, I will make no Apology for this, but do tell thee that I think it necessary to be prefix’d to this Trifle, to prevent thy overlooking some little pains which I have taken in the Composition of the following Story.  Romances are generally composed of the Constant Loves and invincible Courages of Hero’s, Heroins, Kings and Queens, Mortals of the first Rank, and so forth; where lofty Language, miraculous Contingencies and impossible Performances, elevate and surprize the Reader into a giddy Delight, which leaves him flat upon the Ground whenever he gives of, and vexes him to think how he has suffer’d himself to be pleased and transported, concern’d and afflicted at the several Passages which he has Read, viz. these Knights Success to their Damosels Misfortunes, and such like, when he is forced to be very well convinced that ’tis all a lye.  Novels are of a more familiar nature; Come near us, and represent to us Intrigues in practice, delight us with Accidents and odd Events, but not such as are wholly unusual or unpresidented, such which not being so distant from our Belief bring also the pleasure nearer us.  Romances give more of Wonder, Novels more Delight.  And with reverence be it spoken, and the Parallel kept at due distance, there is something of equality in the Proportion which they bear in reference to one another, with that betwen Comedy and Tragedy; but the Drama is the long extracted from Romance and History: ’tis the Midwife to Industry, and brings forth alive the Conceptions of the Brain.  Minerva walks upon the Stage before us, and we are more assured of the real presence of Wit when it is delivered viva voce—

Since all Traditions must indisputably give place to the Drama, and since there is no possibility of giving that life to the Writing or Repetition of a Story which it has in the Action, I resolved in another beauty to imitate Dramatick Writing, namely, in the Design, Contexture and Result of the Plot.  I have not observed it before in a Novel.  Some I have seen begin with an unexpected accident, which has been the only surprizing part of the Story, cause enough to make the Sequel look flat, tedious and insipid; for ’tis but reasonable the Reader should expect it not to rise, at least to keep upon a level in the entertainment; for so he may be kept on in hopes that at some time or other it may mend; but the ’tother is such a balk to a Man, ’tis carrying him up stairs to show him the Dining-Room, and after forcing him to make a Meal in the Kitchin.  This I have not only endeavoured to avoid, but also have used a method for the contrary purpose.  The design of the Novel is obvious, after the first meeting of Aurelian and Hippolito with Incognita and Leonora, and the difficulty is in bringing it to pass, maugre all apparent obstacles, within the compass of two days.  How many probable Casualties intervene in opposition to the main Design, viz....