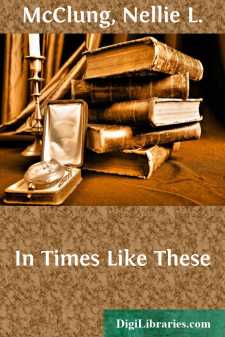 THE WAR THAT NEVER ENDS

If, at last the sword is sheathed,And men, exhausted, call it peace,Old Nature wears no olive wreath,The weapons change—war does not cease.

The little struggling blades of grassThat lift their heads and will not die,The vines that climb where sunbeams pass,And fight their way toward the sky!

And every soul that God has made,Who from despair their lives defendAnd struggling upward through the shade,Break every bond that will not bend,These are the soldiers, unafraidIn the great war that has no end.

We will begin peaceably by contemplating the world of nature, trees and plants and flowers, common green things against which there is no law—for surely there is no corruption in carrots, no tricks in turnips, no mixed motive in marigolds.

To look abroad upon a peaceful field drowsing in the sunshine, lazily touched by a wandering breeze, no one would suspect that any struggle was going on in the tiny hearts of the flowers and grasses. The lilies of the field have long ago been said to toil not, neither spin, and the inference has been that they in common with all other flowers and plants lead a "lady's life," untroubled by any thought of ambition or activity. The whole world of nature seems to present a perfect picture of obedience and peaceful meditation.

But for all their quiet innocent ways, every plant has one ambition and will attain it by any means. Plants have one ambition, and therein they have the advantage of us, who sometimes have too many, and sometimes none at all! Their ambition is to grow—to spread—to travel—to get away from home. Home is their enemy, for if a plant falls at its mother's knee it is doomed to death, or a miserable stunted life.

Every seed has its own little plan of escape. Some of them are pitiful enough and stamped with failure, like the tiny screw of the Lucerne, which might be of some use if the seed were started on its flight from a considerable elevation, but as it is, it has hardly turned over before it hits the ground. But the next seed tries the same plan—always hoping for a happier result. With better success, the maple seed uses its little spreading wings to conquer space, and if the wind does its part the plan succeeds, and that the wind generally can be depended upon to blow is shown by the wide dissemination of maple trees.

More subtle still are the little tricks that seeds have of getting animals and people to give them a lift on their way. Many a bird has picked a bright red berry from a bush, with a feeling of gratitude, no doubt, that his temporal needs are thus graciously supplied. He swallows the sweet husk, and incidentally the seed, paying no attention to the latter, and flies on his way. The seed remains unchanged and undigested, and is thus carried far from home, and gets its chance. So, too, many seeds are provided with burrs and spikes, which stick in sheep's wool, dog's hair, or the clothing of people, and so travel abroad, to the far country—the land of growth, the land of promise....