In The Valley Of The Shadow 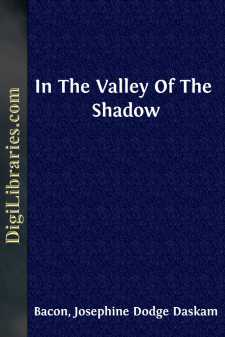 TO Belden, pacing the library doggedly, the waiting seemed interminable, the strain unnecessarily prolonged. A half-hour ago quick feet had echoed through the upper halls, windows had opened, doors all but slammed, vague whisperings and drawn breaths had hovered impalpably about the whole place; but now all was utterly quiet. His own regular footfall alone disturbed the unnatural stillness of a large house.

Outside, the delicious October sun poured down through an atmosphere of faultless blue. The foliage was thick yet, and the red-and-yellow leaves danced heartlessly in the wind. A year ago they had gone on a nutting-party, and Clarice had raced with the children and picked up more than anybody else. Now—even to think of her brought that faint odor of salts-of-lavender and beef-tea that disheartened him so, somehow, when he sat by her bed coaxing her into sipping the stuff.

Some one was coming down the stairs. It was Peter's step—his new one since last Friday, when they had all, it seemed, begun to walk and talk and breathe a little differently. Belden hurried across the room and caught him at the foot of the steps.

"Well, old man, how goes it?" he demanded, with a determined cheerfulness.

His brother-in-law stared at him emptily.

"It's to-morrow," he said, gripping the newel-post, "to-morrow afternoon. Jameson is coming—they'll do it here. Jameson brings his special nurse for the—the operation, but the other one is due at five, and you get her just the same. I told Henry to put up the dog-cart. I don't know, though—maybe the runabout—no, the tire's loose. Still, it might do—"

"For heaven's sake, Peter, don't bother about it! I'll find a rig. What else does he say?"

Peter sat down heavily on the lowest stair.

"Only last week she was so well—and yet she really wasn't. I suppose he knows. But it doesn't seem possible—I can't get it through my head. Poor little Caddy! She never had a sick day in her life. No headaches, like most Women, even—no nonsense—Oh, Belden, what shall we do?"

"Brace up, Peter; think what a good fighting chance means, think of that! It's not as if Caddy were old; she has that on her side. She's seven years behind me, you know."

Peter scowled. "You're fifty, aren't you?"

"Not a bit. Only forty-eight, and just that, too. Now you go out and get the nurse, and I'll stay here. It'll do you a lot of good. Don't mope around in the house all day—what's the use?"

"I can't leave the house. Honestly, Belden, I can't. I've tried twice, and I just walk right back. It's no good. There's the cart—and you won't be long, will you?"

Belden took up the reins with a vague sense of momentary relief: it was something to do. Under the influence of the fresh autumn air his spirits rose; he found himself enjoying the swift rattle of the cart and the beat of the horse's feet. After all, think of Caddy's grit; think of her fine constitution! A fighting chance—that was little enough to say, though. Why couldn't he have put it a little stronger? Hitchcock always was a pessimist.

At the station the usual crowd of well-dressed suburbanites quieted their horses and waited impatiently for the express. As Belden drew up into line, they greeted him with a subdued interest; coachmen left their seats to ask how Mrs....