In the Rocky Mountains A Tale of Adventure 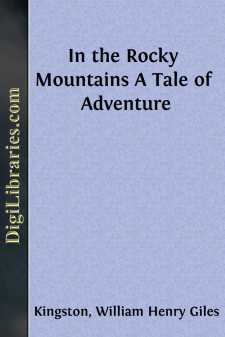 WHY UNCLE JEFF CAME TO "ROARING WATER"—THE SITUATION OF THE FARM—THE INMATES OF THE HOUSE—MY SISTER CLARICE AND BLACK RACHEL—UNCLE JEFF—BARTLE WON AND GIDEON TUTTLE—ARRIVAL OF LIEUTENANT BROADSTREET AND HIS MEN—THE TROOPERS QUARTERED IN THE HUT—OUR FARM-LABOURERS—SUDDEN APPEARANCE OF THE REDSKIN WINNEMAK—HIS FORMER VISIT TO THE FARM—CLARICE ENCOUNTERS HIM AT THE SPRING—BADLY WOUNDED—KINDLY TREATED BY CLARICE AND RACHEL—HIS GRATITUDE.

E were most of us seated round a blazing fire of pine logs, which crackled away merrily, sending the sparks about in all directions, at the no small risk of setting fire to garments of a lighter texture than ours. Although the flowers were blooming on the hill-sides, in the woods and valleys, and by the margins of the streams; humming-birds were flitting about gathering their dainty food; and the bears, having finished the operation of licking their paws, had come out in search of more substantial fare; and the buffalo had been seen migrating to the north,—the wind at night blew keenly from off the snow-capped mountain-tops which, at no great distance, rose above us, and rendered a fire acceptable even to us hardy backwoodsmen.

Our location was far in advance of any settlement in that latitude of North America, for Uncle Jeff Crockett "could never abide," he averred, "being in the rear of his fellow-creatures." Whenever he had before found people gathering around him at the spot where he had pitched his tent, or rather, put up his log-hut, he had sold his property (always to advantage, however), and yoking his team, had pushed on westward, with a few sturdy followers.

On and on he had come, until he had reached the base of the Rocky Mountains. He would have gone over them, but, having an eye to business, and knowing that it was necessary to secure a market for his produce, he calculated that he had come far enough for the present. He therefore climbed the sides of the mountain for a short distance, until he entered a sort of cañon, which, penetrating westward, greatly narrowed, until it had the appearance of a cleft with lofty crags on either side,—while it opened out eastward, overlooking the broad valley and the plain beyond.

He chose the spot as one capable of being defended against the Redskins, never in those parts very friendly to white men,—especially towards those whom they found settling themselves on lands which they looked upon as their own hunting-grounds, although they could use them for no other purpose.

Another reason which had induced Uncle Jeff to select this spot was, that not far off was one of the only practicable passes through the mountains either to the north or south, and that the trail to it led close below us at the foot of the hills, so that every emigrant train or party of travellers going to or from the Great Salt Lake or California must pass in sight of the house.

A stream, issuing from the heights above, fell over the cliffs, forming a roaring cataract; and then, rushing through the cañon, made its way down into the valley, irrigating and fertilizing the ground, until it finally reached a large river, the Platte, flowing into the Missouri. From this cataract our location obtained its name of "Roaring Water;" but it was equally well known as "Uncle Jeff's Farm."

Our neighbours, if such they could be called in this wild region, were "birds of passage." Now and then a few Indian families might fix their tents in the valley below; or a party of hunters or trappers might bivouac a night or two under the shelter of the woods, scattered here and there; or travellers bound east or west might encamp by the margin of the river for the sake of recruiting their cattle, or might occasionally seek for shelter at the log-house which they saw perched above them, where, in addition to comfortable quarters, abundant fare and a hospitable welcome—which Uncle Jeff never refused to any one, whoever he might be, who came to his door—were sure to be obtained.

But it is time that I should say something about the inmates of the house at the period I am describing.

First, there was Uncle Jeff Crockett, a man of about forty-five, with a tall, stalwart figure, and a handsome countenance (though scarred by a slash from a tomahawk, and the claws of a bear with which he had had a desperate encounter)....