In the Library The Lady of the Barge and Others, Part 6. 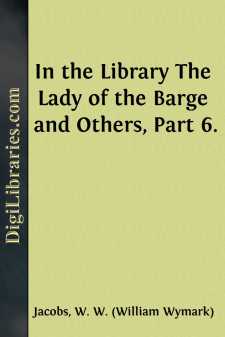 The fire had burnt low in the library, for the night was wet and warm. It was now little more than a grey shell, and looked desolate. Trayton Burleigh, still hot, rose from his armchair, and turning out one of the gas-jets, took a cigar from a box on a side-table and resumed his seat again.

The apartment, which was on the third floor at the back of the house, was a combination of library, study, and smoke-room, and was the daily despair of the old housekeeper who, with the assistance of one servant, managed the house. It was a bachelor establishment, and had been left to Trayton Burleigh and James Fletcher by a distant connection of both men some ten years before.

Trayton Burleigh sat back in his chair watching the smoke of his cigar through half-closed eyes. Occasionally he opened them a little wider and glanced round the comfortable, well-furnished room, or stared with a cold gleam of hatred at Fletcher as he sat sucking stolidly at his brier pipe. It was a comfortable room and a valuable house, half of which belonged to Trayton Burleigh; and yet he was to leave it in the morning and become a rogue and a wanderer over the face of the earth. James Fletcher had said so. James Fletcher, with the pipe still between his teeth and speaking from one corner of his mouth only, had pronounced his sentence.

"It hasn't occurred to you, I suppose," said Burleigh, speaking suddenly, "that I might refuse your terms."

Burleigh took a great mouthful of smoke and let it roll slowly out.

"I am to go out and leave you in possession?" he continued. "You will stay here sole proprietor of the house; you will stay at the office sole owner and representative of the firm? You are a good hand at a deal, James Fletcher."

"I am an honest man," said Fletcher, "and to raise sufficient money to make your defalcations good will not by any means leave me the gainer, as you very well know."

"There is no necessity to borrow," began Burleigh, eagerly. "We can pay the interest easily, and in course of time make the principal good without a soul being the wiser."

"That you suggested before," said Fletcher, "and my answer is the same. I will be no man's confederate in dishonesty; I will raise every penny at all costs, and save the name of the firm—and yours with it—but I will never have you darken the office again, or sit in this house after to-night."

"You won't," cried Burleigh, starting up in a frenzy of rage.

"I won't," said Fletcher. "You can choose the alternative: disgrace and penal servitude. Don't stand over me; you won't frighten me, I can assure you. Sit down."

"You have arranged so many things in your kindness," said Burleigh, slowly, resuming his seat again, "have you arranged how I am to live?"

"You have two strong hands, and health," replied Fletcher. "I will give you the two hundred pounds I mentioned, and after that you must look out for yourself. You can take it now."

He took a leather case from his breast pocket, and drew out a roll of notes....