In the Forbidden Land An account of a journey in Tibet, capture by the Tibetan authorities, imprisonment, torture and ultimate release 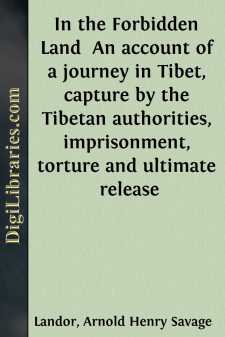 IN THE FORBIDDEN LAND

Times: "The ordinary reader will be struck with the portraits, which show that in a very few weeks he must have endured a lifetime of concentrated misery. Other travellers, no doubt, have gone further, but none who have escaped with their lives have fared worse.... Mr. Landor tells a plain and manly tale, without affectation or bravado. It is a book, certainly, that will be read with interest and excitement."

Athenæum: "The account he has written of his travels and adventures is vivid and often fascinating. His frequent notices of curious customs are full of interest, and numerous illustrations from photographs or sketches taken on the spot render this one of the most attractive records of travel published recently."

Guardian: "Life, according to Mr. Landor, has 'barely a dull moment,' and the gloomiest of us will admit that this is at least true of that part of life which may be devoted to the reading of his latest book."

World: "He has contrived, even in circumstances of cruel disadvantage, to present a wonderfully minute and impressive series of pictures of the life, manners, and customs of the Tibetans. No less powerful and vivid are his descriptions of the scenery and natural phenomena of the Forbidden Land, which are reinforced by an ample series of illustrations that attain a high standard of artistic excellence. Mr. Landor's bitter experiences have had at least the advantage of providing him with material for the most absorbing travel book produced within recent times."

Daily Telegraph: "Mr. Landor's story is one of the most extraordinary tales of modern times, yet even the most sceptical reader will admire the vigour with which it is told, and the endurance with which the explorer and his faithful servants bore up against their savage captors."

Standard: "The book fascinates ... The verbal pictures it gives are extremely vivid, and the effect of them is greatly heightened by the numerous drawings and photographs by the author. Mr. Landor is an artist as well as traveller and writer, and he knows how to use his pencil and brush to emphasise his letter-press. Whatever may be said of the wisdom of his enterprises, his book is certainly a remarkable contribution to the literature of modern travel."

Daily News: "The great library of travel in the East has not received for many a year a more important addition than this bright, picturesque, and instructive volume."

Daily Chronicle: "Mr. Landor is an artist as well as a writer, and this handsome volume is most lavishly illustrated with sketches and photographs. Apart from its intense interest as a story of stirring adventure, the book is a valuable storehouse of information on Southern Tibet and its people, and on the little known Indian district of Northern Kumaon. This is surely a record of devotion to geographical science such as no previous explorer has been able to show."

A. Henry Savage Landor and his Two Faithful Servants

IN THE FORBIDDEN LAND AN ACCOUNT OF A JOURNEY IN TIBET CAPTURE BY THE TIBETAN AUTHORITIES IMPRISONMENT, TORTURE, AND ULTIMATE RELEASE BY A....
Show more
Show less