In the Days of Poor Richard 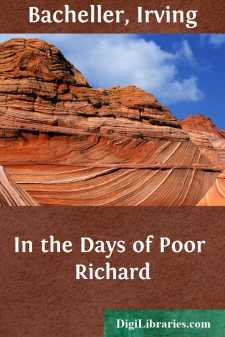 CHAPTER I THE HORSE VALLEY ADVENTURE

"The first time I saw the boy, Jack Irons, he was about nine years old. I was in Sir William Johnson's camp of magnificent Mohawk warriors at Albany. Jack was so active and successful in the games, between the red boys and the white, that the Indians called him 'Boiling Water.' His laugh and tireless spirit reminded me of a mountain brook. There was no lad, near his age, who could run so fast, or jump so far, or shoot so well with the bow or the rifle. I carried him on my back to his home, he urging me on as if I had been a battle horse and when we were come to the house, he ran about doing his chores. I helped him, and, our work accomplished, we went down to the river for a swim, and to my surprise, I found him a well taught fish. We became friends and always when I have thought of him, the words Happy Face have come to me. It was, I think, a better nickname than 'Boiling Water,' although there was much propriety in the latter. I knew that his energy given to labor would accomplish much and when I left him, I repeated the words which my father had often quoted in my hearing:

"'Seest thou a man diligent in his calling? He shall stand before kings.'"

This glimpse of John Irons, Jr.--familiarly known as Jack Irons--is from a letter of Benjamin Franklin to his wife.

Nothing further is recorded of his boyhood until, about eight years later, what was known as the "Horse Valley Adventure" occurred. A full account of it follows with due regard for background and color:

"It was the season o' the great moon," said old Solomon Binkus, scout and interpreter, as he leaned over the camp-fire and flicked a coal out of the ashes with his forefinger and twiddled it up to his pipe bowl. In the army he was known as "old Solomon Binkus," not by reason of his age, for he was only about thirty-eight, but as a mark of deference. Those who followed him in the bush had a faith in his wisdom that was childlike. "I had had my feet in a pair o' sieves walkin' the white sea a fortnight," he went on. "The dry water were six foot on the level, er mebbe more, an' some o' the waves up to the tree-tops, an' nobody with me but this 'ere ol' Marier Jane [his rifle] the hull trip to the Swegache country. Gol' ding my pictur'! It seemed as if the wind were a-tryin' fer to rub it off the slate. It were a pesky wind that kep' a-cuffin' me an' whistlin' in the briers on my face an' crackin' my coat-tails. I were lonesome--lonesomer'n a he-bear--an' the cold grabbin' holt o' all ends o' me so as I had to stop an' argue 'bout whar my bound'ry-lines was located like I were York State. Cat's blood an' gun-powder! I had to kick an' scratch to keep my nose an' toes from gittin'--brittle."

At this point, Solomon Binkus paused to give his words a chance "to sink in." The silence which followed was broken only by the crack of burning faggots and the sound of the night wind in the tall pines above the gorge. Before Mr. Binkus resumes his narrative, which, one might know by the tilt of his head and the look of his wide open, right eye, would soon happen, the historian seizes the opportunity of finishing his introduction....