In the Brooding Wild 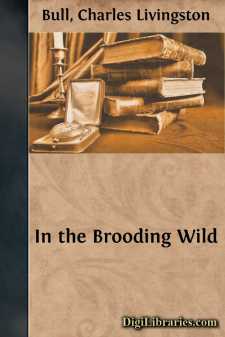 To the spirit which broods over the stupendous solitudes of the northern Rockies, the soul of man, with all its complex impulses, is but so much plastic material which it shapes to its own inscrutable ends. For the man whose lot is cast in the heart of these wilds, the drama of life usually moves with a tremendous simplicity toward the sudden and sombre tragedy of the last act. The titanic world in which he lives closes in upon him and makes him its own. For him, among the ancient watch-towers of the earth, the innumerable interests and activities of swarming cities, the restless tides and currents of an eager civilization, take on the remoteness of a dream. The peace or war of nations is less to him than the battles of Wing and Fur. His interests are all in that world over which he seeks to rule by the law of trap and gun, and in the war of defence which he wages against the aggression of the elements. He returns insensibly to the type of the primitive man, strong, patient, and enduring.

High up on the mountainside, overlooking a valley so deep and wide as to daze the brain of the gazing human, stands a squat building. It seems to have been crushed into the slope by the driving force of the vicious mountain storms to which it is open on three sides. There is no shelter for it. It stands out bravely to sunshine and storm alike with the contemptuous indifference of familiarity. It is a dugout, and, as its name implies, is built half in the ground. Its solitary door and single parchment-covered window overlook the valley, and the white path in front where the snow is packed hard by the tramp of dogs and men, and the runners of the dog-sled. Below the slope bears away to the woodlands. Above the hut the overshadowing mountain rises to dazzling heights; and a further, but thin, belt of primeval forest extends up, up, until the eternal snows are reached and the air will no longer support life. Even to the hardy hunters, whose home this is, those upper forests are sealed chapters in Nature’s story.

Below the dugout, and beyond the valley, lie countless lesser hills, set so closely that their divisions are lost in one smooth, dark expanse of forest. Blackened rifts are visible here and there, but they have little meaning, and only help to materialize what would otherwise wear an utterly ghostly appearance. The valley in front is so vast that its contemplation from the hillside sends a shudder of fear through the heart. It is dark, dreadfully dark and gloomy, although the great stretch of pine forest, which reaches to its uttermost confines, bears upon its drooping branches the white coat of winter.

The valley is split by a river, now frozen to its bed. But, from the hut door, the rift which marks its course in the dark carpet cannot be seen.

In the awesome view no life is revealed. The forests shadow the earth and every living thing upon it, and where the forest is not there lies the snow to the depth of many feet. It is a scene of solemn grandeur, over which broods silence and illimitable space.

Out of the deathly stillness comes a long-drawn sigh. It echoes down the hillside like the weary expression of patient suffering from some poor creature imprisoned where ancient glacier and everlasting snows hold place. It passes over the low-pitched roof of the dugout, it plays about the angles and under the wide reaching eaves. It sets the door creaking with a sound that startles the occupants. It passes on and forces its way through the dense, complaining forest trees. The opposition it receives intensifies its plaint, and it rushes angrily through the branches. Then, for awhile, all is still again. But the coming of that breath from the mountain top has made a difference in the outlook....